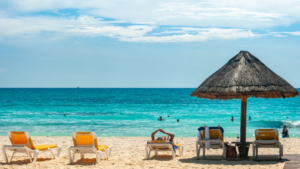 Pulling data from “thousands of quotes for travel insurance” between the Fall of 2019 and the Fall of 2021, Canadian rate comparison web site Rates.ca reports that travel quotes by Canadians have surged by 293 per cent since this time last year.

The report cautions that’s still not back to pre-pandemic levels – but it’s moving sharply in the right direction for Canada’s travel trade.

Canadians’ travel plans – while increasing – have changed, though. “Interest in domestic travel climbed 330% from Q3 2019 to Q3 2021 while interest in international travel fell 14%,” the report says.

US Down, but Still Number One

Interest in travel to the U.S. has plummetted by 66 per cent from 2019, but it’s still the number one destination for Canadian travellers.

At the same time, interest in domestic Canadian travel nearly doubled since prior to the pandemic. Canada has “moved into second place,” reports Rates.ca, and domestic travel now beats out both Mexico and the U.K. Previous favourites like Italy have dropped off the list of top destinations altogether.

The pandemic shifted the profile of Canadian travellers too, the Rates.ca data reveal, with interest in travel since 2019 dropping the most among the oldest Canadians, and the least among the youngest.

As interest in travel starts to trend upwards again, Rates.ca says requests for quotes for travel insurance of all types: all-inclusive, single and multi-trip travel medical and trip cancellation, is following suit, although, like interest in travel, not yet reaching pre-pandemic levels.