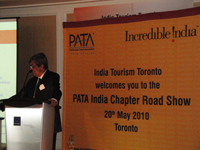 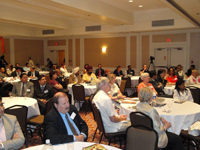 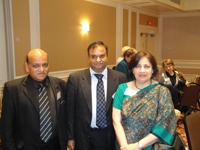 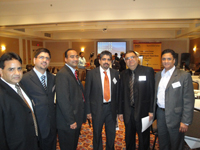 Last Thursday marked the final stop for the India Chapter of the Pacific Asia Travel Association (PATA) on their North American Road Show Promotional tour, which included Chicago, Los Angeles, Boston and New York. For Thursday’s tour finale the India Chapter set up shop at Hotel Novotel near Toronto’s waterfront to entertain a large crowd of guests from the travel industry.

Arriving guests were greeted by an open bar effectively raising spirits and warming the crowd up before the presentations were to begin. Unfortunately the presenter Sujit Banerjee, Secretary Ministry of Tourism for India, seemed pretty worn out from the tour by the time he hit Toronto. His presentation consisted of a full half hour of reading directly from his PowerPoint presentation in a barely audible tone. Truly unfortunate, because the lack of enthusiasm overshadowed the fact that there have been some exciting new developments in India tourism and India truly has an awful lot to offer.

India has made a big effort to improve its highways and roads linking major centers which should increase safety and accessibility. A new terminal reportedly able to handle 60 million passengers per year is scheduled to come online in July at Delhi’s airport. Delhi’s infrastructure has also seen significant upgrades in preparation for the Commonwealth Games which are coming to the city in October. In addition, over the next 5 years the country plans to see 90,000 new hotel rooms in operation to meet demand.

And demand is growing because westerners are realizing how diverse and otherworldly the experiences in India can be. India’s ability to cater to a variety of travellers’ tastes and objectives is surely rivaled by few other places on earth. From eco-tourism to the cuisine, the historical and spiritual experiences on offer, India can deliver all of this and more. Whether you’re on a tight budget or intending to splurge, the options for India’s visitors are extremely broad.

In fact, India’s tourism board recently won a number of awards for a commercial they produced which highlights the broad range of possible experiences in the country. You can check it out on Open Jaw’s Jaw Tube.