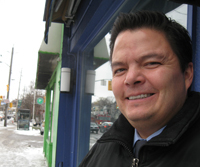 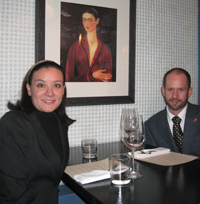 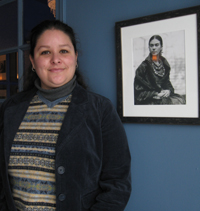 Karina Torres of Mexicana poses by a portrait of her fellow Mexican, artist Frida Kahlo.

Mexicans are known for their hospitality.Â  Thatâ€™s why we were so impressed that Alfonso Sumano, who heads the Tourism Board in Canada, made Richard Zarkin feel so much at home during a recent visit to Toronto.

Zarkin, in town for a special luncheon of industry types, was treated to some of the first snow weâ€™ve seen this year.Â  After January weeks of dry roads (dry!) and lawns that were almost green (green!), Alfonso managed to coax an inch or so of the white stuff from the skies. We hope that it helped show Zarkin, who is the public relations manager for Riviera Nayarit, one of the reasons Canadians love to come to Mexico.

And do we ever: even in a tough year, Canadian visits to the country were up 7 per cent in 2009, with figures showing that over a million of us headed south-south of the border in the first 11 months. OlÃ© to that!

It looks like a lot more of us are going to be discovering the â€œnewâ€ region north of Puerto Vallarta soon.Â  The area, which boasts 307 km of coastline including countless beaches, presently has 12,000 hotel rooms â€“ two thirds of which are considered luxury. â€œGolf, ecotouring, spas and whalewatching, especially between January and March, are huge attractions,â€ says Zarkin, recalling enjoying a drink on a hotel terrace and admiring the view of three whales cavorting out at sea. â€œYou donâ€™t even have to be in a boat to whale watch with us!â€

Over the next 20 years the area is slated for phases of development, not unlike those of the Riviera Maya on the Caribbean coast. â€œTo think that three years ago, the Riviera Nayarit was a new brand, and now eight or nine travel agents out of ten know where it is,â€ said Zarkin proudly.

Perhaps itâ€™s because Vallarta Nayarit also has a secret tourism-marketing weapon:Â  the head of the local tourist board is Quebecker Marc Murphy.


Bet he doesnâ€™t miss shovelling the white stuff one bit!