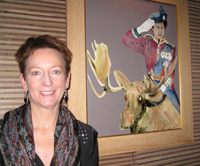 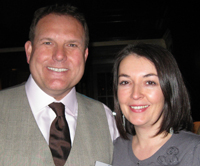 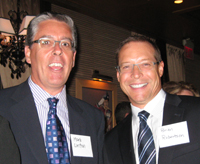 Canadians love Britain for all its olde world history â€“ and there arenâ€™t too many places in Toronto that evoke that traditional English charm more than the Windsor Arms Hotel.Â  All beamed ceilings and leaded windows, itâ€™s a quiet boutique hotel in tony Yorkville.

Perhaps a tad noisier than usual recently, thanks to the annual VisitBritain holiday bash. Over 100 industry types and anglophiles filled the hotelâ€™s chic Prime Restaurant to chat about the industry, the festive season, and (of course) Britain.

The guest of honour was Sandie Dawe, VisitBritainâ€™s CEO, on her first visit to Canada in her new role. â€œIâ€™m delighted to be here at this seasonal tradition!â€ she enthused. â€œBut I must say the bitter cold reminds me just how mild our winters are,â€ she added to appreciative laughter. â€œCanadians are great fans of Britain, they venture further out into the country and stay longer than many other visitors, and are now among our top 10 visitors by country.â€ The UK is hoping that Canuck visits in 2010 will top the million mark â€“ which will definitely be a good excuse to break out the Watneys Red Barrel.

And speaking of exploring Britain beyond London, Sandie admits she has a soft spot for the Isle of Wight, off the south coast of England. â€œGoing there is like turning back the clock.â€Â  VisitBritainâ€™s Katherine Woschiz feels an undiscovered gem is Wales (â€œPeople know Ireland and Scotland are different from England, but donâ€™t know how different Wales is too.â€). Her colleague Meredith Pearson is fond of her home town of Liverpool while Lynda Falcone loves the city of York:Â  â€œItâ€™s all about the history, everywhere you see has a story behind it.â€

Speaking of stories, Sandie was quite taken with the famous Canadian painting â€œQueen on Mooseâ€ hanging in the restaurant. â€œI think the Queen would be quite amused!â€

And lucky us to be part of another successful British bash.Â  Cheers and happy Christmas to all at VisitBritain!