Both Air Canada and WestJet have announced that they will begin restoring summer flights to some of the smaller Canadian airports where they were forced to cut service during the pandemic.

WS announced Wednesday that it is returning to YHG, YFC, YQM, YQY and YQB after service was suspended to those airports in NOV. Their reinstatement means WestJet will once again be flying its complete pre-COVID domestic network. Service is set to resume on 24JUN.

“We committed to return to the communities we left, as a result of the pandemic, and we will be restoring flights to these regions in the coming months, of our own volition,” said Ed Sims, WestJet, President and CEO.

Air Canada is also ramping up domestic regional service by adding weekly flights to existing routes, as well as reinstating service from MAY. This includes:

Canada’s hard-hit airlines are in negotiations with the federal government for a potential financial aid package. One of Ottawa’s conditions for such aid has been that air carriers resume regional air flights like the ones WS and AC are restoring.

Finance Minister Chrystia Freeland is set to release a federal budget on April 19 which could potentially contain details of aid for the industry.

WestJet continues to advocate for Atlantic premiers to ensure the region is open to Canadians this summer.

“We ask that federal and provincial governments work with us to provide clarity and certainty to Canadians, including travel policies that support economic recovery and restore jobs,” Sims said.

Newfoundland and Labrador’s advisory council on tourism recommended last week that the province open to all Canadians by July 1, or even earlier, if circumstances allow.

“Alongside an accelerated and successful vaccine rollout, we are hopeful that there will be an easing of onerous travel restrictions currently in place. We look forward to working together to safely reconnect Canadians to the region in the coming months,” said Sims. 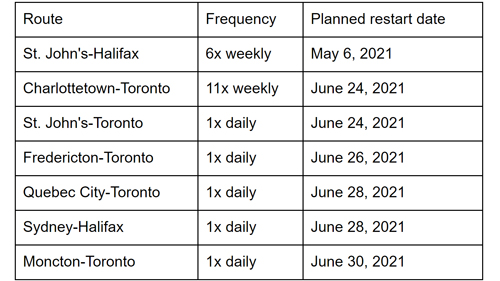 Anna is OJ’s newest member and she joins the team as a writer/reporter. She co-writes the daily news and covers events. Although she’s new to the industry, pursuing a career path in travel/tourism has been a goal since her first family road trip to the Florida Keys sparked a desire to discover the world and this exhilarating, fast-paced industry.