Nearly two-thirds (65 per cent) of Canadians polled in an Angus Reid Institute (ARI) survey support banning international travel to decrease the amount of people going on non-essential trips during the pandemic.

One-quarter (26 per cent) said they would maintain the federal government’s current approach, which has been to “strongly, strongly, strongly” discourage travel, but not outright prohibit it. Under new federal rules, travellers five years and older are required to show proof of a negative COVID-19 test result prior to boarding a flight to Canada.

The strongest desire to completely close the Canadian border emerged from Ontario and Quebec, two provinces accounting for the majority of COVID-19 cases in the country. In both provinces, some 70  per cent of respondents expressed support to prohibit international travel, while this view drops significantly in other parts of the country, with the lowest show of support in Alberta (48 per cent). 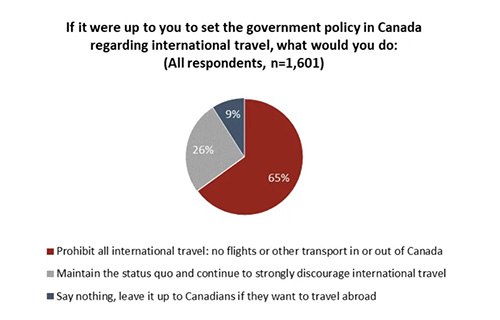 The Angus Reid survey also gauged respondents’ reaction to recent reports of sun-seeking Canadian politicians travelling for leisure. Nearly nine-in-ten respondents said politicians should set a better example and stay close to home. Just one-in-ten (11 per cent) tilted towards a viewpoint that, like any other Canadian citizen, they have the same rights to travel if they so choose. Albertans are slightly more likely to hold this view.

The public’s anger at politicians travelling abroad stems from the fact that so many Canadians have put off travel themselves, says the poll, which found that 70 per cent of respondents have cancelled or postponed planned international travel or domestic travel since the pandemic began.

These impressions come at a time when overall concern about the COVID-19 pandemic remains at peak levels. Seven-in-ten (71 per cent) are worried about becoming sick themselves, while 85 per cent are concerned about their friends or family

The Angus Reid Institute conducted an online survey from 07–11JAN, 2021 among 1,601 Canadian adults who are members of Angus Reid Forum. The survey was self-commissioned and paid for by ARI.