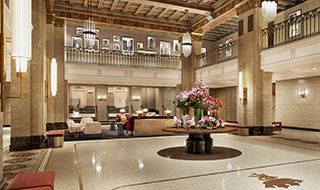 The renovated lobby at the
Fairmont Royal York.

Since 1929, Fairmont Royal York has welcomed millions of travellers from around the globe, lit up the silver screen as the most filmed location in Toronto and played host to some of the city’s most unforgettable moments including the G20 Summit, Bill Clinton’s 60th birthday and the Queen’s Jubilee.

Now, as its 90th birthday approaches, the world-famous hotel will mark its next historic chapter with a majestic transformation, modernizing the building while honouring the iconic landmark’s historical and architectural elements.

The grand renovation will be completed summer 2019, in time for the hotel’s official anniversary celebration.

The reveal will include transformed arrival and check-in experience, newly imagined dining venues, contemporary event and meeting spaces, and a completely redefined Fairmont Gold, presenting some of the finest luxury hotel offerings and services in the city.

Led by global design firm Rockwell Group, the concept behind the lobby borrows inspiration from the aesthetics of Toronto’s railway system and Union Station, which the hotel connects to through underground tunnels. One of the elements in the lobby is a sweeping ramp that guides guests to check-in stations inspired by train ticketing counters.

At the heart of the hotel’s transformation is its food and beverage experience by Fairmont executive chef, jW Foster, who has planned a new program that works closely with Ontario farmers to provide authentically local ingredients in each new menu to uphold the brand’s commitment to sustainable food.

The hotel’s luxurious new Fairmont Gold suites offer personalized services by the highly trained “Les Clefs d’Or” concierge experts, timeless décor and access to the Fairmont Gold Residents Lounge on the 18th floor. Two new ‘Legacy Suites’ will also debut as part of the hotel’s transformation, described as residential-style urban retreats that capture the charm of the metropolitan lifestyle with an added allure of personalized service.

The hotel’s meeting, event and wedding spaces will also receive a revamp to reflect a more modern style and highlight the property’s historical features.