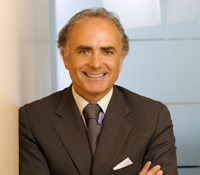 Berlin — Air Canada chief Calin Rovinescu was publically challenged in front of his peers by another airline president Monday at the annual gathering of the International Air Transport Association.

Rovinescu, Air Canada’s president and CEO, was taking part in a forum on airline issues when an audience member — Akbar Al Baker, CEO of Qatar Airways — asked whether Canada’s air transport policy was being set by Air Canada rather than by the government. The conference was attended by

the presidents of many of the world’s major airlines.

Al Baker said a document from Air Canada was stifling requests from Qatar Airways, Emirates and Etihad Airways, all based in the Persian Gulf, for new or expanded services from Toronto. He said the airlines should be able to operate from their countries to Canada just as Air Canada operates from

Canada to other countries.

“There is no free lunch,” Rovinescu said in reply. “Someone must make a business case to me to agree to something that doesn’t make economic sense to me.” The intention of the three airlines is to carry connecting passengers on to other countries, rather than to bring them to their home bases, he said.

“I work for the [Air Canada] shareholders,” he said, “not for the better good of foreign carriers.”

During the panel discussion Rovinescu talked about two of Air Canada’s priorities which, at first glance, could seem contradictory. One is to reduce the amount the carrier spends on labour; the other is to stimulate employees to improve customer service.

It is possible to balance the two, he said later in an interview. Labour costs will not be reduced by wage concessions and rollbacks, but through attrition, he said. The result could be four employees doing the work of five, but wages and benefits will be protected. The airline is also building bridges with union leaders by giving them confidential financial information at quarterly meetings, Rovinescu said.

The airline’s emphasis on changing employees’ attitudes to customer service has already paid off with a number of recent awards and honours, he said. These include being named the best airline in North Ameriac in a Skytrax survey of more than 17 million air travellers from 100 countries.

Asked if Air Canada is no longer the airline travellers love to hate, Rovinescu said, “I’m sick and tired of hearing that expression. Our employees are more engaged than a year ago.”