A group of French wine connoisseurs  sent wine into space a year ago – and now they’re drinking it.

“I found there was a difference in both color and aromatics and also in taste,” said wine writer Jane Anson. “It just felt a little bit older, a bit more evolved than the wine that had remained on Earth.”

Anson said that the star-studded trip added two to three years of maturity to the vintage.

The 2000 bottle of Chateau Petrus Merlot was one of 12 that made its way back to Earth after being  taken to space on a SpaceX capsule in an attempt to explore “new ways of growing plants.” 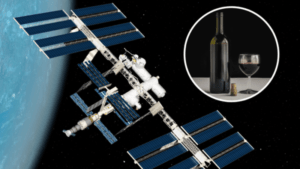 The group of experts tasted the space specimen alongside another glass of the same wine that had remained on Earth, before being told which was which.

The wine and its vines left this planet in two shipments in NOV 2019 and MAR 2020, and landed back on Earth near Cape Canaveral, Florida, earlier this year.

They are now being studied to see exactly how the zero-gravity trip affected them. Scientists will compare the vines to their terrestrial counterparts, with the aim of adapting vines to grow in harsher environments.

Maybe in the future, space wine could be paired with a nice (satellite) dish? Who knows!

Either way, we’re on Cloud ‘Wine’.