The Antigua and Barbuda Tourism Authority for Canada returned to the Montreal market on Tuesday, 22NOV with a Media and Travel agent event at Le Courtyard by Marriott. Billed as a “Dine and Learn,” the event drew over 85 travel agents and trade media personnel for a night of cuisine and announcements from the destination. 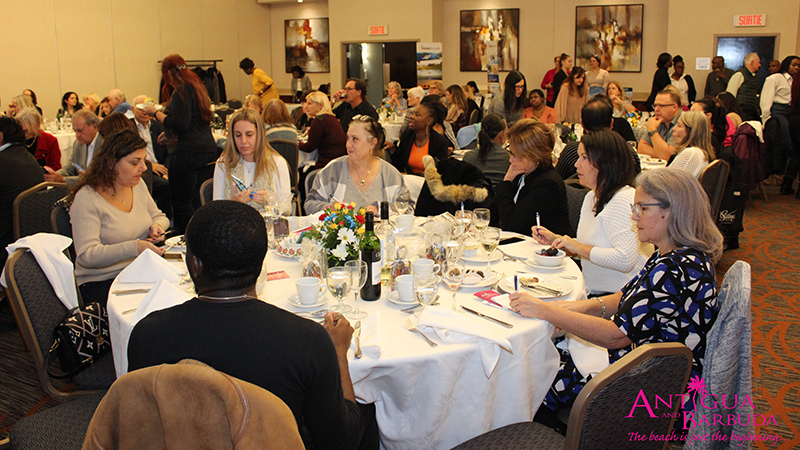 Tameka Wharton, Director of Tourism Ag. at the Antigua and Barbuda Tourism Authority said, “With Montreal being one of our most important Canadian markets, we were thrilled by the turnout at the event and look forward to sharing more good news from Antigua and Barbuda with Canadians in the future.”

Tourism officials and partners updated industry partners in attendance on Antigua and Barbuda’s plans and initiatives for the 2023 travel season. Specifically, the Tourism Authority shared the news of the return of the direct flight from Montreal’s YUL to Antigua’s V.C. Bird International Airport (ANU). The first Air Canada flight, set to operate weekly beginning 23DEC, 2022, is already sold out.

Agents and media took selfies in front of a giant LED screen depicting the destination’s tropical beauty, with the advisor whose selfie and accompanying hashtag #loveantiguabarbuda garners the most interactions winning a spot on an upcoming Fam trip in 2023. Montrealers will get a taste of Antigua and Barbuda on the big screen as three LEDs will pop up in the city throughout DEC to promote travel to Antigua & Barbuda.

Additionally, the Antigua and Barbuda Association members present were invited to participate in the social media contest featuring the LED screen. The eventual winners will be awarded a 2-night stay in Antigua & Barbuda. Further prizes were distributed throughout the evening including a Grand Prize featuring two Air Canada seats to Antigua & Barbuda from Montreal.