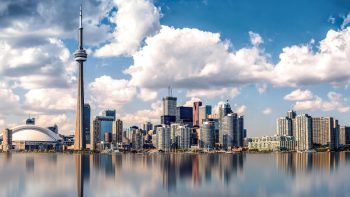 Foodies around the world refer to the famous MICHELIN guides to book their culinary adventures. And destinations with MICHELIN-annointed restaurants are considered the pinnacle of fine living.

That’s led many food/travel observers tuned in to Canada’s unique and diverse culinary scene to wonder: Why doesn’t Canada have any MICHELIN-starred restaurants or any other attractions?

We simply have never had a MICHELIN guide for any Canadian destination.

Finally, and well-timed for travel recovery, Canada is being put on the MICHELIN map.

At an event at the Four Seasons Hotel Toronto on 10MAY, representatives from the MICHELIN announced the impending issue of the first MICHELIN Guide – Toronto, coming in the fall of 2022.

It’s the first MICHELIN guide in Canada, and only the sixth North American destination to be written up in one of the famous French guide books.

According to MICHELIN, “A new chapter begins in Toronto, which features global eats and charming cafes as well as high-end dining experiences. It’s a city where top chefs want to establish a presence and where emerging chefs nurture their culinary talent – both drawing on locally produced ingredients unique to Ontario.

“This selection will reflect the local flavors and international influences of this gastronomic scene.”

“Toronto’s culinary scene is as diverse as the city itself, and MICHELIN Guide Toronto  is the perfect way to celebrate our culinary community,” ” said Scott Beck, President & CEO of Destination Toronto.

“It will be a powerful way to share our culinary capabilities with new audiences from around the world.”

Toronto Mayor John Tory also chimed in. “This is an exciting moment for our city as Toronto will become the first MICHELIN Guide destination in Canada. This further bolsters our reputation as a world destination for food and cuisine. Our diverse city along with the many renowned chefs who call Toronto home have helped us get to this point and to be able to showcase all of the wonderful restaurants.”

MICHELIN inspectors will now be discovering Toronto’s culinary cuisine over the coming months, and writing their reviews. The City of Toronto notes the coveted ratings in the upcoming guide will involve  “complete autonomy regarding the restaurants assessed and the outcome of those assessments.”

Mayor Tory urged diners not to wait for the MICHELIN guide, but “to continue supporting and celebrating the revival of Toronto restaurants by dining in locally to sample the diverse culinary offerings our restaurants have to offer,” added Mayor Tory.

MICHELIN guides began in France over a century ago as a way for the tire company to encourage early car-owners to travel on road trips throughout the country and beyond (and buy tires!) Its lists, reviews and famously-starred ratings of dining, accommodation, destinations and attractions set a standard for all guide books that followed.