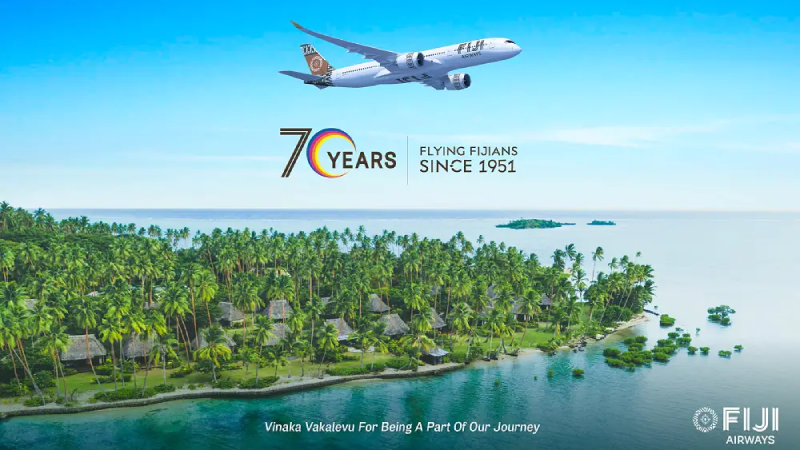 Fiji Airways, the country's national airline, commemorates its 70th anniversary on 01SEP 2021. The occasion was marked by airline staff connecting virtually from Fiji and global offices to reminisce the airline’s 70-year history and rally to ensure its survival post-pandemic.

The carrier flies out of Canada from YVR, and through its partner airlines connects to 108 destinations around the world.

Fiji Airways' first flight took off on 01SEP 1951, as founder Harold Gatty’s 7-seater De Havilland Dragon Rapide, piloted by Captain Fred Ladd, took off from the Fiji’s Luvuluvu airstrip (Nausori), now known as SUV, to Drasa Airport (near Lautoka). Since then, Fiji has evolved from its first one-hour bumpy flight to a carrier operating 20 jet and turbo-prop aircraft with 108 global destinations.

Mr. Rajesh Punja, Fiji Airways Chairman said: “Fiji Airways has consistently broken new ground for 70 years, creating a bridge for Fiji to the world and the world to Fiji. COVID has grounded commercial flying temporarily, but cannot wipe our 70-year history. We thank our predecessors, our people, and partners old and new for their commitment and support over the years and we prepare to resume flying, hopefully in just a few months, and lead Fiji’s tourism and economic recovery.”

“While we are not celebrating our 70th anniversary, or FJ 70 as we call it, with fanfare, we are commemorating the occasion quietly to recognise how far we have come as an airline. Our grit and determination to survive and thrive, as we have done for 70 years, is the foundation on which our airline will return to the skies post-pandemic.”

He added: “The trailblazing achievements of our founder Harold Gatty created a legacy that has lasted seven consecutive decades. The commitment and resolve of our people, shareholders and partners will see us power through for another seven decades and more. We must acknowledge the critical and ongoing support we have had from the Fijian Government, especially our Prime Minister and Line Minister the Attorney General. We thank them for their unwavering commitment to the National Airline. Of course, we are eternally grateful to the people of Fiji for their faith in Fiji Airways throughout the 70 years.”

Fiji Airways says that it connects to more Pacific Island countries than any other carrier.

According to Viljoen, the airline is working on its re-opening framework, finalized in partnership with health officials from the Fiji government. “Our flight schedules will be released immediately following an official announcement by Government which outlines border requirements. One of these will undoubtedly be that visitors must be fully vaccinated, a position Fiji Airways strongly supports," he said.