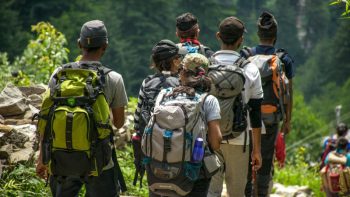 Tour operator Exodus Travels published a new report on 10MAY highlighting the positive impact travel has on creating new relationships and building community based on survey results of 2,000 Americans.

“For many of us, our most cherished moments in life are not tied to individual places, events, or activities, but instead, are about people—those we have built into our lives already and others who are brought our way by chance and fortuitous encounters. Similarly, when it comes to moving about the planet, so often it’s the memories of those we meet on these journeys that linger with us most over time and distance,” Exodus wrote.

Travel = Connectivity and even Romance

According to the survey (commissioned through OnePoll), 77 per cent of Americans questioned have made lifelong friendships when travelling, while 23 per cent met their spouse on a trip, one third (33 per cent) reported a “vacation romance,” and a quarter (25 per cent) met their current best friend on a trip. Some didn’t even need to make it to their destination to find romance —three in 10 respondents have dated someone they met on a plane.

While the vast majority of respondents believe travel can strengthen existing bonds (71 per cent), and that the right travel companion can make or break a trip (69 per cent), 49 per cent also report having taken a “life-changing” solo trip in the past. 20 per cent who have taken a solo trip note they find it easier to meet people when they’re travelling solo and 71 per cent sharing that they’ve met someone on a trip who gave them a new perspective or has since changed their lives.

“What makes a trip unforgettable?” asks Robin Brooks, Marketing Director at Exodus Travels. “The unexpected appreciation from locals when you traveled so far because you want to know their them and their culture. And the tales of family, history, and dreams unearthed by strangers-turned-newfound-friends over a shared meal—so often it’s these moments that conjure lasting memories, whether we are building a ‘just for now’ or new forever-relationship, or sowing the seeds of cross-cultural understanding that will impact our personal worldview for years to come.”

When asked what they are looking forward to when they start travelling again, 44 per cent said having new experiences and seeing friends, family, or other loved ones, while 442 per cent said seeing new destinations.

What is the best approach for those ready to socialize? Several suggestions appeared at the top of the survey list: participation in a variety of activities (31 per cent argue this strategy works); followed by participation in group tours or hotel events (tied at 28% per cent); engagement in sports, active hobbies, and other physical activities (27 per cent); or even just time at a bar or restaurant (26 per cent say this has led to new friendships).

Notably, respondents acknowledge a subset of all-new travel relationships may eventually evolve into “social media friendships” or “vacation-only friendships” after a trip has ended. However, the vast majority do not see this “fizzling down” as a negative. Rather, 79 per cent believe new travel friends make their experiences better (even if they lose touch afterward) and recount gaining on average four new friendships and 12 new social media followers on past trips. Plus, there’s the possibility a lifelong relationship will have been captured in that mix, with 77 per cent reporting friendships continuing well after their return home.

What’s Different When We Travel?

Brooks notes, “small group travel offers us a chance to bring a refreshed version of ourselves to the ‘vacation table,’ leaving our day-to-day worries behind while reconnecting and reinvigorating parts of ourselves that may have been waning in the shadows of our everyday responsibilities at home—all whether or not we already have pre-established travel partners in our back pockets.”

69 per cent of survey respondents said travelling has made them “kinder and more interesting people,” with two thirds (66 per cent) sharing that the new people they meet on trips lead to a “much better travel experience overall,” and 77 per cent noting their journeys are far more “rewarding and immersive” when they have the chance to connect with local people.

Further findings from Exodus Travels’ survey can be found below.

What relationship do respondents report from their travels?

For more information on Exodus Travels, visit its web site.