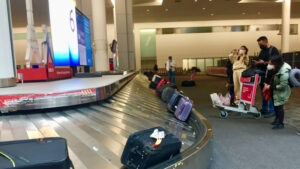 It’s been a rough road to recovery for the travel industry, and now, the Ukraine war has put up another roadblock.  Not just longer routes to circumnavigate closed airspace and cancellation of itineraries.

The war’s impact on fuel prices now imperils even travel well away from the conflict itself.

Just when eased travel restrictions and a March Break bookings uptick was making the travel horizon a little rosier, experts around the world and here in Canada warn of fuel surcharges and rising airline ticket costs that may dampen the vital summer travel season.

With oil at its highest price since 2008, a report in Skift points out that airlines are newly vulnerable even as they have been weakened by COVID. While a number of carriers have hedged oil in their financial plans -  that will allow them to at least partially ride out the volatility -  some international airlines have already started to increase fares. The report says Malaysia Airlines, AirAsia, Emirates, Japan Airlines, ANA, and Air New Zealand have already imposed fuel surcharges or raised fares.

Elsewhere, head of Qantas, Alan Joyce, is quoted as predicting fares will rise by 7 per cent, a figure some industry observers say could be on the low side, pointing out that fuel makes up over a third of most airlines’ operating costs.

Closer to home, Reuters reports that, “Air Canada and U.S. legacy carriers have said they do not have current plans to hedge,” oil prices. According to CBC, hedging used to be a common practice at Air Canada, and without that protection, the airline is “vulnerable to price spikes such as this one.”

Nevertheless, it quotes Air Canada spokesperson Peter Fitzpatrick denying the airline has plans to increase prices or add fuel surcharges as a result of the Ukraine war’s impact on oil prices. Fares can change frequently in both directions, Fitzpatrick added, due to a number of factors, “apart from fuel costs, including ... competition, demand, marketing considerations and the type of traffic that a route serves.”

WestJet spokesperson Denise Kenny is quoted by Reuters saying that airline hasn’t increased ticket prices, either, or "made any deliberate change to our systems in response to the rising cost of fuel."

She points out the burden COVID has already put on carriers, and that nearly a quarter of an airline ticket price in Canada is “going to regulatory fees.”

Still, experts say the best advice for consumers considering air travel this year is to “buy now.”  That allows a consumer to benefit from a locked-in price if fares rise, and also possibly “if the price goes down, and they have properly identified a workable refund process, they will get the difference back,” says Marc-David Seidel of UBC’s Sauder School of Business.

Travel consumers are also urged to consider how soaring oil prices will impact an entire journey, not just airfare. UBC’s director for transportation studies, David Gillen, points out to Global News that travel by car - and therefore road trips or coach tours or rental car expenses and even overall cost of living in a destination - will also be affected by rising fuel costs.

“Air travelling is only one component of travelling. Both at the origin and the destination, there’s lots of other stuff going on,” he says.

The bottom line: higher fares combined with increasing costs of living and other aspects of travel may see the impact of soaring fuel prices hindering industry recovery throughout the summer.