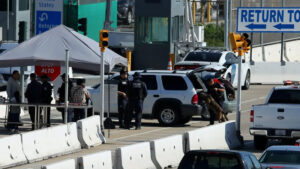 As U.S. border finally opened for vaccinated Canadians on Monday, the lineups of Canadian licence plates could be seen for miles.

According the the CBC, wait times to enter the U.S. ran two to three hours at the traditionally busy crossings like the Peace Bridge in Buffalo or St-Bernard-de-Lacolle in Quebec before the backlogs cleared.

In the town of Coutts, Alta., however, the wait stretched to four hours. Mayor Jim Willett said vehicles and RVs began showing up as early as Friday, tripling the population of a town that’s usually home to fewer than 300 people.

In Plattsburgh, N.Y., a favourite shopping haven for Montrealers, Quebec licence plates began filling the parking lot of the Champlain Centre mall — a destination so dependent on cross-border traffic that it uses the Canadian spelling of its name on all its marketing material and signage.

“A great deal of the Plattsburgh economy is supported by Canadian visitors,” said Charles Loscalzo, the manager of Bookburgh Books. He estimated that roughly half of his customers in past years were from north of the border.

Canada’s requirement that anyone entering or re-entering the country must show proof of a negative PCR test, along with their vaccination cards is still seen as a major impediment. It is being targeted by business leaders and U.S. lawmakers. Requiring a family of four to shell out an extra $1,000 for a “redundant” test is unnecessary, they say.

“People don’t want to be constrained anymore,” said Rep. Brian Higgins, a New York congressman and one of the most vocal critics of the restrictions.

“Remove the redundant testing. And let’s really celebrate this opening, so that we can realize the full potential of the United States and Canada getting back to its friendship, getting back to its binational relationship in an economic way, but also in a life quality way.”