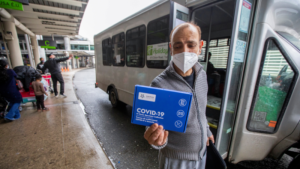 Reports have picked up on MP’s appearing to expose weaknesses in the federal government’s hotel quarantine strategy.

Calgary’s Western Standard Online is reporting an exchange Friday between a number of MP’s and Public Health Agency President Iain Stewart during testimony at the Commons health committee.

At issue are over a thousand arrivals who duly went into hotel quarantine as required – but reportedly tested positive for COVID-19 even after they were released.

The reported exchange begins with Vancouver-area MP Don Davies asking Stewart, ““How many passengers arriving in Canada have tested positive for COVID-19 after leaving their mandatory three-day hotel quarantine?”

“I’m wondering how this can happen,” a Manitoba MP, Larry Maguire said, following the confirmation of the number.

But that wasn’t quite the ‘gotcha’ moment for the government. It’s not like those 1400 people became free to transmit the virus into their communities in Canada.

The quarantine process for air arrivals into Canada is described on a federal government web site page, and there are already provisions to cover that scenario.

As Open Jaw has reported, it’s a three-phase process, beginning with a traveller presenting a negative COVID-19 test prior to boarding a flight to Canada.

On arrival, pax are tested again as the second step, after which, they must report to an approved, pre-booked quarantine hotel, to await their arrival test results.

As soon as they receive a negative test result, they can check out, even if it’s before the third night. Then pax must complete the remainder of the 14-day quarantine plan they submitted to officials on their arrival.

The third step is the ‘Day-8’ test, and pax must follow their quarantine plan – usually at home-  until they receive that third negative test result.

Government protocols do include a plan for the other possibility: “Positive results on your Day-8 test: You must isolate yourself from others immediately for a period of 14 days that begins from the time you took the test with positive results… A government representative will call you to provide you with additional instructions.”

So the line of questioning of public health officials in the House of Commons Friday didn’t reveal a failure to identify and isolate people who tested positive.

It revealed that the 3-test system essentially works.

Those 1400 pax who were permitted to leave hotel quarantine were still following their 14-days-total quarantine plan they laid out for border officials on arrival. And they got their third tests as required.

The statistics show their third, ‘Day-8’ test did catch their COVID-19 positive status, (which took til then either because of false negatives from the previous two tests, or because the virus is believed to take up to 2 weeks to show up in tests) which then triggered further follow up and community protection.

A Strike Against Hotel Quarantines

The MPs’ questions revealed weakness, not the testing and quarantine process overall, but solely in the mandatory hotel quarantines.

Davies’ follow-up question is telling: “Have any of the 297 people who have paid a $3,000 fine for failing to stay in a quarantine hotel tested positive for COVID-19?”

Stewart reportedly replied, “I am not aware of the medical histories of all those people.”

The government continues to defend its border practices, including mandatory hotel quarantines for air arrivals.

But statistics like these appear to show that 3-phase testing process and home quarantine plans alone would catch and safely isolate COVID cases on arrival, and reveal that hotel quarantines, which many Canadians see as unnecessary and punitive, are not a necessary burden on travellers arriving into Canada.