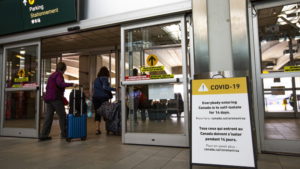 Some Canadians are ready to talk vaccine passports, but political leaders have their hands full grappling with the third wave of COVID-19 and want more data.

Prime Minister Justin Trudeau said Ottawa is looking carefully at the issue of vaccine passports as people slowly receive their first shots and get a rough sense of when they might be fully vaccinated.

“As was the case pre-pandemic, certificates of vaccination are a part of international travel to certain regions and are naturally to be expected when it comes to this pandemic and the coronavirus. How we actually roll that out in alignment with partners and allies around the world, it’s something that we’re working on right now,” CTVNews.ca quoted Trudeau as telling reporters on Tuesday.

The prime minister wouldn’t offer any details or timelines. Canada restricts discretionary and non-essential travel and has mandatory testing and quarantine hotels for anyone flying into this country, whether they’re vaccinated or not.

The United States, meanwhile, has been abuzz with a report in The New York Times that says fully vaccinated Americans should be able to travel to European Union countries this summer, as long as they can prove they’ve received authorized shots, likely with vaccine passports.

Ontario Premier Doug Ford’s government is now calling on Ottawa to boost restrictions for interprovincial travellers in the face of a lethal surge in hospitalizations and growing cases of COVID-19 variants.

CP24.com reports that Ontario has just written to the federal ministers of health and public safety explaining that the province has closed land borders with Quebec and Manitoba to non-essential travel but doesn’t have any way to guard against interprovincial air travel, which is something that Ottawa controls.

The letter detailed how 17 domestic flights have arrived at YYZ in the last two weeks with possible COVID-19 exposures. Flights landing at YOW and YHM are also at risk.

Ontario is asking Ottawa for mandatory PCR testing for all inbound domestic — not just international — air travellers and stressing that limiting mobility is essential to reducing the risk of further spread of the variants.

More than 70 per cent of daily cases in Ontario have been confirmed as variants of concern, said the letter signed by Ontario Health Minister Christine Elliott and Solicitor General Sylvia Jones. “These variants entered through our borders, both international and domestic, and it is critical that every effort is made to keep them out,” they wrote.

Public health officials are reluctant to put a timeline on when Canadians can safely do things such as travel, noting that we don’t yet know whether asymptomatic people can still spread the virus, how long vaccinations are effective and when boosters will be needed.

About 9.2 million Canadians (24.21 per cent) have received at least one dose of a COVID vaccine, and about 900,000 or 2.37 per cent have received two, according to the federal government.

Jennifer Bain is an award-winning travel writer who wanders Canada & the world in search of quirk. She has also authored numerous cook and travel books. When she isn’t on the road, Jennifer lives with her bison rancher husband and three kids in Toronto, and has a writing retreat on one of the “four corners of the Flat Earth” — Fogo Island in Newfoundland and Labrador.

Air Transat Begins California Service with Direct Flights from YUL to LAX
Flights to LAX will be operated until the end of OCT 2022 three times weekly. On 19MAY, Air Transat will also ...