Globus family of brands is shaking up its tour product offering, announcing the launch of Independence by Globus.

Instead of its Monograms brand, that provides FIT travellers the benefits of Globus’ group travel but on their own, and in their own time, the new branding realigns the offering as Globus without the Group.

Stéphanie Bishop, managing director for the Globus family of brands, confirmed to OpenJaw the rebranding of Monograms as an independent version of better-known Globus tours.

“Coming out of the pandemic – and recognizing the traction and reputation of Globus – we felt we had an opportunity to accelerate the growth of our independent vacations under the Globus umbrella. By moving Monograms’ most popular itineraries to new, Independence by Globus, we’re offering advisors and their clients the best of both Globus and our independent vacations,” she told OpenJaw.

“With Independence by Globus, our guests are free to enjoy the many benefits of touring, on their own and without the group,” Bishop describes the offering in a Globus release.

“They can look forward to enjoying travelling better in destinations across the globe, on their own, with hand-picked hotel accommodations, hand-selected optional excursions and the services of local experts to uncover the perfect ways to spend their days on vacation.”

Globus without the Group. As is the case with all Globus journeys, on an Independence by Globus vacation, Globus takes care of the logistics and details for guests with included accommodations, daily breakfasts, select guided sightseeing and transportation between cities. And, as it does with all Globus itineraries, the company can also handle flight arrangements and airport transfers.

Personalization. Independence by Globus also provides access to hand-selected optional excursions to enrich their journeys, as well as seamless extensions and destination add-ons to customize each independent tour with personal interests.

“For those who love Globus but want to venture further, enjoying the world their way, without the group, Independence by Globus gives travellers the “I” time they crave on vacation,” added Bishop in the statement. 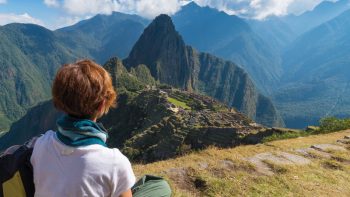 As Bishop indicated, the first Independence by Globus tours are cherry-picked from Monograms most popular itineraries. Some are immediately available and others are rolling out under the new branding before the end of the year.