New York City is back in a big way, and tourism officials are spreading the news in Canada.

Following a meeting in Montreal earlier this week, NYC and Company officials and their Canadian representatives gathered to brief the media in Toronto on 01DEC, holding a morning session at the trendy Ace Hotel.

“As we continue to come out of the pandemic, our mission is to tell visitors that it’s time to return to New York City. If you don’t book that trip now you’re missing out.”

Dixon said Canada is the city’s number two market, behind only the UK. More than 650,000 Canadians are expected in NYC this year, and they’re projecting 900,000 for next year.

The Canadian market’s rebound has been one of the strongest in the world, he said.

NYC and Company is emphasizing deep dives into all five boroughs; Manhattan, Queens, Brooklyn, The Bronx and Staten Island.

“We want visitors to experience New York like a New Yorker,” Dixon said. “We also continue to push messaging to the meetings trade that it’s time to meet in New York City.

“The group and convention business is rebounding strongly,” with 8.9 million business visitors expected this year.

Officials showed off a great video based on their “It’s Time For NYC” campaign. The video featured such notables as Billy Joel and actor Ben Vereen, and included segments such as “Time to Meet,” “Time for Art,” “Time to Dine,” and “Time to Shop.” They also showed an Emmy Award-winning short video about Black surfers at Rockaway Beach in Queens.

Dixon said NYC and Company has produced materials highlighting the Black experience in New York City, as well as the Latino Experience and the Asian Experience. There’s also a Halal guide to the city and a guide for Muslim visitors that includes places to eat and pray.

NYC and Company launched its biggest-ever tourism campaign in 2021, and Dixon said there are new ads coming to Canada. 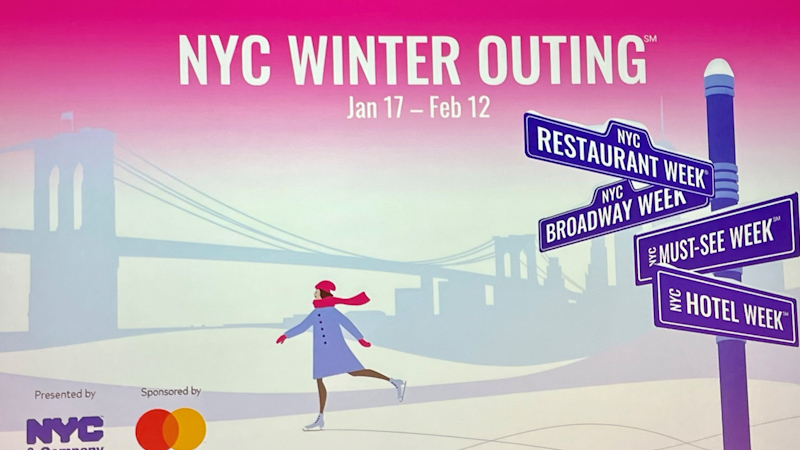 Dixon said New York City Hotel Week will return for its second year in 2023, with 23% off hotel stays from Jan. 3 to Feb. 12. More than 140 hotels across the city are taking part.

Dixon said all Broadway shows are included in the discounts for Broadway Week, including “Hamilton” for the first time. “Phantom of the Opera” will not take part as it’s being phased out and will be replaced by Andrew Lloyd Webber’s “Bad Cinderella.”

“Everything you want to see in New York will be an exceptional value,” he said. “We think it will have huge appeal here in the Canadian market because you’re so close.”

Dixon laid out a list of new projects and improvements for NYC, including:

- A $1.5 billion expansion of the Javits Convention Center, which now has a rooftop garden and an orchard, meaning they’re growing little apples in The Big Apple.

- The new Moynihan Train Hall is a new Manhattan home for Amtrak and the Long Island Rail Road; a $1.6 billion project that transforms the 100+ year-old James A. Farley Post Office Building into a modern, world-class transit hub. Dixon noted that Amtrak trains run from Toronto to New York City.

- Billions of dollars for New York City-area airports, including $8 billion in spending at a bright, new La Guardia LGA, a new $10 billion, international terminal for JFK, and $2.7 million in renovations at Newark Liberty (EWR).

Dixon said the giant Christmas tree was lit at Rockefeller Center this week and that NYC is expecting a “blockbuster” tourist season, with 6.5 million visitors between U.S. Thanksgiving and New Year’s.

He also said New York City and Company is partnering with Canada on the World Cup in 2026, and that he hopes the final game will be in NYC.

Tiffany Townsend, Executive Vice President Global Communications at NYC and Company, said the city has 124,000 hotel rooms, with 11,000 more coming in the next two years. Notable new properties include a luxurious Aman Hotel, a second Ritz-Carlton, a new Ace Hotel in Brooklyn, a Virgin hotel with a rooftop pool and bar coming next year, a Westin being built on Staten Island, and a Radio Hotel in Washington Heights.

Other attractions either in place or on the way include an island park in the Hudson River called Little Island, the One Vanderbilt Summit (excellent views of midtown Manhattan), and a QC day spa on Governor’s Island, with tremendous views of the city.

There are 19 new productions debuting on Broadway next year, Townsend said, including “KPOP The Musical,” “Death of a Salesman,” and Jessica Chastain in “A Doll’s House.” There’s also a new Museum of Broadway for visitors to enjoy, with exhibits on everything from “Oklahoma” to “The Lion King.”

The legendary Apollo Theater in Harlem is being expanded, and there’s a new David Geffen Hall at the Lincoln Center, as well as a Universal Hip Hop Museum in The Bronx.

New food and drink options are constantly popping up in the city that never sleeps, including a gorgeous food hall in the South Street Seaport called The Tin Building, a project from famed chef and restaurateur Jean-Georges Vongerichten.

Jim Byers is a freelance travel writer based in Toronto. He was formerly travel editor at the Toronto Star and now writes for a variety of publications in Canada and around the world. He's also a regular guest on CBC, CTV News, Global News and other television and radio networks.

Back to On the Town Articles