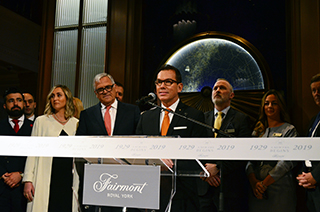 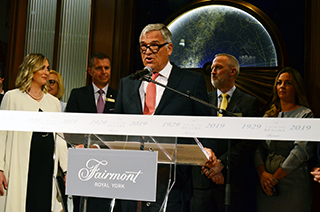 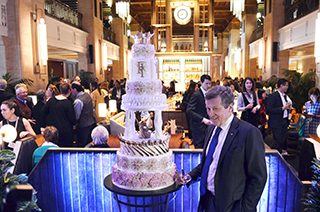 Mayor Tory getting ready for the celebratory cake-cutting. 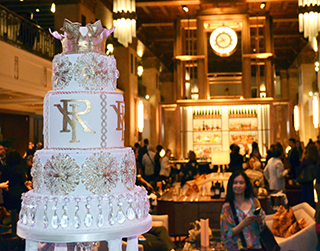 The birthday cake with the newly unveiled timepiece in the background. 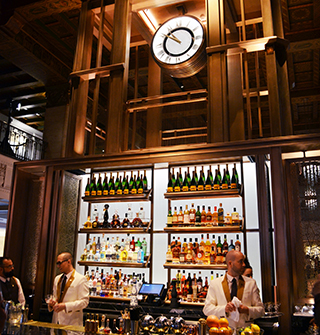 The 90th Anniversary Clock is dedicated to the people of the city of
Toronto.

Exactly 90 years ago, on 11JUN 1929, Fairmont Royal York welcomed the world for the first time.

Over those nine decades the hotel has earned a place of heritage and heart at Toronto’s centre, existing at the core of many significant events in the city, hosting many dignitaries, royalty, celebrities, heads of state and diplomats throughout the years.

“The hotel means a lot to the city,” Edwin Frizzell, Regional VP and Fairmont Royal York General Manager told Open Jaw. “Many people remember driving into Toronto for the first time and seeing the skyline, which was very much dominated by Fairmont Royal York. Even today, you can catch a glimpse of her reflected off lots of buildings downtown. It has always been an iconic building. I think Toronto feels like she is part of the community. We treasure that and we believe it’s our responsibility to be stewards of that and to make sure that she is successful for many years to come.”

The hotel is no longer the tallest along the skyline, nor is it the most luxurious as it competes with trendy, lavish boutique hotels.

But if there’s something it excels at to this day, it’s a timeless grace and elegance, which were out in full force at its 90th anniversary grand lobby reopening event yesterday, the hotel’s most extensive transformation to date. The occasion was marked with an official ribbon cutting ceremony, Champagne, a celebratory birthday cake and a floral installation titled “The Celebration Cake” that captures the hotel’s legacy and Golden Era roots.

On the lobby side, the statement timepiece features a constellation clock to reflect the timelessness of the hotel, while the Clockwork side showcases a classic motif encouraging a new generation to “meet at the clock.”

The hotel’s 2002 spiral staircase lobby clock is now stored for archival purposes while the Fairmont team finds it a new home in the hotel.

The second food and beverage establishment, Reign Restaurant, Bar and Bakery, is set to fully open later this week.

“We believe that food and beverage is a brand definer for us, so the heart and soul of the hotel needs to not only invite the guests that are staying in the building, but also our local community, to make it feel like it is the place where they need to spend time,” says Frizzell. “Investing and continuing to stay current and relevant and help keep Toronto on the world stage is critically important and as one of the signature hotels in Toronto, being part of that city life and ensuring that we continue to be financially successful as a destination is a key part of our responsibility.”

As well as the lobby transformation, all 1,329 guest rooms have been completely restyled and all functional spaces, ballrooms and concert halls have been updated. The reception desk has also been redone, offering a new check-in experience for guests.

On top of that, Fairmont Royal York has revamped its luxury boutique hotel-within-a-hotel on the top of the building, dubbed Fairmont Gold. The 104 suites include a private check-in area, offering an exclusive experience.

To honour its past, the hotel commissioned author and historian Dr. Carolyn Harris to help create a self-guided history tour for guests to explore the hotel’s public spaces and learn more about its storied past. 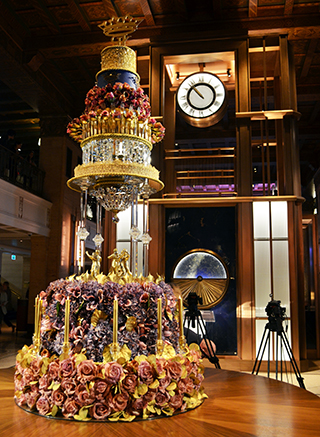 To capture the hotel’s legacy and Golden Era roots, Frank Rea of
Forget Me Not flowers designed a floral installation, The Celebration Cake,
which will be on display in the hotel lobby for the month of JUN.

Anna is OJ’s newest member and she joins the team as a writer/reporter. She co-writes the daily news and covers events. Although she’s new to the industry, pursuing a career path in travel/tourism has been a goal since her first family road trip to the Florida Keys sparked a desire to discover the world and this exhilarating, fast-paced industry.