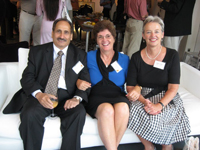 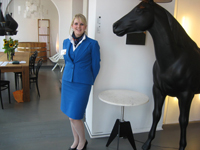 The Netherlands is always eager to show off its highly developed sense of style, and to find innovative ways to showcase it. In celebration of their latest fashion, architecture and art exhibitions, Conrad van Tiggelen, Director North America for the Netherlands Board of Tourism and Diane Audet, External Communications Manager, Air France- KLM, “Miss Holland Canada” Henny Groenendijk and Rosina Shiliwala, the NBT’s PR Director for North America invited their local friends to Toronto’s own trendy Dutch designer HQ, the Klaus by Nienkamper Showroom on King St. E.

The assembled travel folks were offered Dutch treats including specially designed martinis in a choice of either Delft blue or Holland’s signature orange. Contrad also treated us to a demonstration of how to eat the traditional Dutch herring. It’s fun to watch – but it’s clearly not an easy feat. We all enjoyed plenty of other traditional Dutch hors d’oeuvres, but there were no other candidates willing to swallow a big herring filet.

In typical Dutch style, the tourism folks are seeking ways to engage a new younger demographic to come and view their museum and gallery exhibitions. They’ve come up with the concept of Saturday night parties staged as Museum Nights in Amsterdam, The Hague and Rotterdam. Each city will run a series of the events in conjunction with their own museums.

In Amsterdam, on every Saturday in November, Amsterdam’s museums will remain open until 2 a.m. to welcome visitors. More than 40 museums will collaborate for Museum Nights and besides viewing the exhibitions, the festivities will include DJs, bands, dance, performances, film, food and drinks.

KLM’s Business Class travellers have always had their designs set on the carrier’s traditional onboard gift – a miniature Delft blue canal house filled with Dutch genever. Each year on the airline’s anniversary in October, KLM introduces a new house to the series of collector’s items. This year KLM will be celebrating its 91st birthday, and the 91st house will be introduced. You will have to fly Business Class to get one though -these special little houses are exclusively given to KLM’s guests in Business Class.