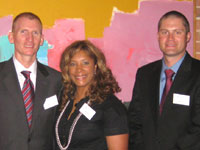 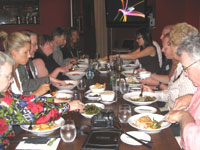 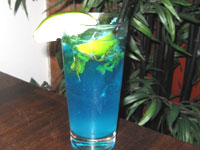 The Virgin Big D cocktail, a concoction specially prepared for this occasion

Representatives from The Big D appeared in Vancouver recently. Relax, it’s not a large grocery chain or a big box store…just the nice folks from Dallas, Texas.

Why Vancouver? Actually, Dallas was here not as part of a tourism road show, but because they were attending the Meeting Professionals International’s (MPI) 2010 World Education Congress (WEC) conference, one of the biggest meetings at the Vancouver Convention Centre with over 2,600 delegates.

The lunch was held in a private room at the Goldfish Pacific Kitchen, a restaurant specializing in Pacific Rim cuisine, set in the heart of trendy Yaletown. Phillip Jones, CEO of the Dallas Convention & Visitors Bureau, tucked into a B.C. special for his entrée – local salmon in a curry sauce. But he jested with a straight face that the tenderloins (another entrée option) were specially flown in from Dallas! No guesses as to why our hosts chose the restaurant, seeing as they hail from the land of the Texas Longhorns!

“We are committed to the Canadian market,” said Jones. He added that the bulk of Canuck travellers hailed from Calgary (who recorded the highest number of business visitors), Toronto, Montreal and Vancouver. Besides, there is no excuse not to visit since there are daily flights to Dallas from the four big markets in Canada, he continued.

On a personal note, Jones, an elite triathlete who once competed in the Ironman in Penticton, B.C., enjoyed being in Vancouver as he was running along the Seawall at Stanley Park and even talked about taking on the vertically challenging Grouse Grind.

After highlighting the new products in Dallas, Jones enthused about the upcoming 2011 Super Bowl that will feature the largest scoreboard in the world at 21 metres high by 49 metres wide. Other projects in the pipeline include the 1,000-room Omni Dallas Hotel that will be connected to the convention centre (completion date: 2012) and a light rail service that will run from the DFW airport to downtown by 2014.