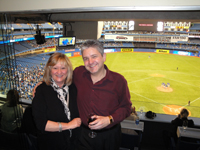 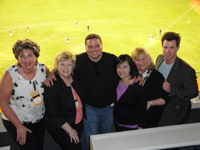 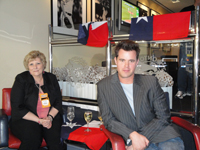 Steaks, seafood, beer and baseball mixed in with some good ol’ friendly hospitality. That’s right y’all, Texas Tourism was in Toronto last week and hosted a fine party in a private suite at the Rogers Centre while the Jays took on their Rangers. The Jays and Rangers combined to score 26 runs in an onslaught of offense and Texas Tourism followed suit with an offense of their own armed with great food and free drinks.

For me Texas is one of those states that comes to mind when I think of the places on my “must visit” list. I know there’s that place that isn’t California or New York with possibly the longest list of cultural, historical and modern attractions than any other. Whether it’s their music festivals, their restaurants, or their religion of American football, there really isn’t another state that does it bigger or with more genuine enthusiasm than Texas.

Being a Torontonian I like to think that our friendliness and politeness puts us on a similar level with Texas’ charming reputation. I’m sure Texas Tourism was expecting good ol’ friendly Toronto when they planned to host an event and purchase ad space in the Rogers Centre during a Blue Jays game. However, this isn’t the early 90’s when Jays fans were riding a biscuit wheeled gravy train of pro sports success. No, Toronto sports teams are mired in a funk so bad that we’re willing to boo at anything and anyone within earshot.

So take it from me Texas Tourism, while your smiling faces were shown on the jumbo screen and your presence at the game was announced, that loud chorus of spontaneous “Boooo’s” from the fans was just Toronto expressing our own insecurities and our reaction does not reflect our feelings toward the great state of Texas.