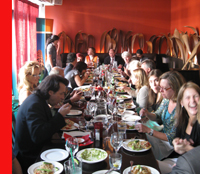 The congenial group at Milagro Restaurant 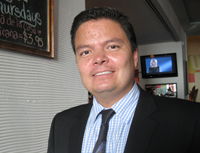 The guest of honour, Alfonso Sumano 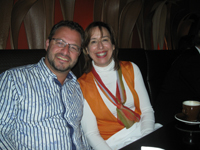 What better way to say farewell to a dear Mexican friend than an evening of fellowship, friendship and guacamole?

So it was that a small group of industry types convened recently to bid adios to Alfonso Sumano, Regional Director for the Mexico Tourism Board in Canada.

The setting was the wonderful Milagro (Spanish for miracle) Restaurant on the edge of the theatre district in downtown T.O. The company? A mix of tour operators (Total Vacations, Thomas Cook), retailers (itravel2000, Moreno Travel) and industry veterans including Steven Kaufman of TripAtlas.

The guest of honour was sporting a tan from the recent Tianguis trade show in ACA, his last official duty wearing his Canadian “hat”.  He’s off to New York where he will be the new Regional Director in charge of the U.S. Replacing him is Guillermo Eguiarte, most recently Regional Director based in Tokyo.

What was striking was that although this was a “work function”, everyone I spoke to was genuinely sorry to say adios to an admired and trusted friend.  As Total’s Tammy Cecco put it, “He’s been so great for the Canadian market and has helped us promote Mexico as a cultural destination.” Steven Kaufman wishes him “Bon voyage and bonne chance” while Gonz Moreno commented that “He’s done a tremendous job in a short timeframe – his commitment to Canada isn’t over yet, I’m sure.” And Deputy Director for the Tourism Board Monica Garcia added, “I’ll miss his leadership – he’s a great boss and a role model.” Cristina Alvaradejo will miss his energy, humour, and the good vibes (and houseplants) he brought to the office.

So, what will Alfonso miss about us? Tims? Canadian Tire? Hockey Night in Canada? “I’ll miss my friends, and Toronto, a city I love. And our partners – they are really engaged in Mexico and I will miss them very much.”