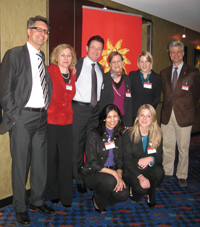 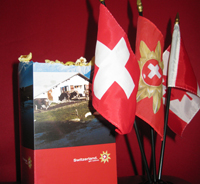 Themed popcorn boxes got us in the mood!

We all know the Swiss are prompt. Efficient. Wholesome. And handsome.

But who knew they were so darned funny?

If being able to poke fun at yourself (while offering a sterling travel product) were a sport, then the Swiss win the gold. As a number of industry types found out at an imaginative movie-themed get-together hosted at the snazzy VIP cinema at the Odeon Varsity in Toronto.

There are dozens of connections between Switzerland and Tinseltown.Â  George Clooney may have a villa in Italy â€“ but I hear that he chooses to ride his motorcycle in Switzerland. Audrey Hepburn lived there. Many of James Bond movies were filmed there, and Swiss Miss Ursula Andress was the first â€œBond Girlâ€. Even Bollywood comes to Switzerland to film scenes of snow-capped mountains.

If thatâ€™s not enough to convince us that Switzerland is worth a visit, our genial hosts showed us TV commercials featuring a Santa-like Swiss fellow decanting brandy into a St. Bernardâ€™s collar barrel (see image at right) and a series of hunky cowherds and hikers assuring women that, in a World Cup year when many men will be glued to the tube, there will be a warm welcome for them in Switzerland. Another commercial shows two gents staggering up a mountain to place a huge rock in a brook â€“ just so hikers can use it as a stepping stone.Â

Along with the chuckles, Alex Herrmann – who heads up Switzerland Tourism in North America – shared some good numbers: our dollar is up 15 per cent against the Swiss franc. Switzerland welcomed over 90,000 Canucks last year. And theyâ€™re anticipating a 5 percent increase in Canadian overnights this year.

And â€œGrueziâ€? Itâ€™s Swiss-German for hello – and no doubt welcome as well to clean, pristine, and very funny Switzerland.