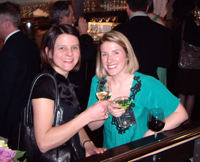 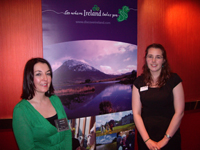 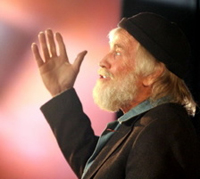 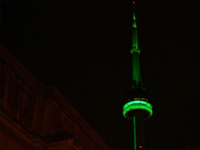 All lit up for the occasion

Like an annual tidal wave of green sweeping far and wide, this yearâ€™s St. Patrickâ€™s Day celebrations overtook many cities around the globe.Â  Over the years Tourism Ireland has been waxing up their proverbial surfboards and riding this massive one day wave of everything Irish for all itâ€™s worth.Â  Well they know that the fond memories of swilling green beer and the wearing of the green down all manner of city streets and avenues will entice many of us to actually go see the emerald isle for ourselves.

This year Tourism Ireland had global domination in their sights as they implemented an audacious propaganda ploy and turned some of the worldâ€™s most iconic structures green.Â  Sydneyâ€™s Opera House, the London Eye, the Empire State Building and our own CN Tower all sported a festive shade of green in celebration of St. Patrick.

So, with its outer facade bathed in a bright shade of green light, Tourism Ireland hosted a brilliant cocktail party 1,151 feet up in the sky at the CN Towerâ€™s 360 restaurant.Â  Irish hors d’oeuvres, green apple martinis and of course Guinness highlighted the menu, while Irish storyteller and spoken word artist Jonathan Lynn entertained the crowd with poetry and tales of his homeland. Â Â Â Â Â

The evening was all about highlighting Ireland as a destination for Canadians in 2010.Â  Listening to Tourism Irelandâ€™s Canadian manager Judith Cassidy, you realize that Ireland is one of those destinations that really does have a lot to offer its visitors.Â  Anyone seeking a destination with numerous historical sites, a vibrant modern arts scene, world class golf and even great surfing will find it in Ireland.Â  This year Cork city, with its burgeoning arts and restaurant scene, was named in Lonely Planetâ€™s â€œBest in Travel 2010â€.

After hearing so much about Ireland and its embarrassment of tourism riches I found myself asking the question, â€œDoes Tourism Ireland really even need a day to get us drunk in order to convince us to take a holiday there?â€Â  The answer is likely no. But Iâ€™m not complaining.Â Â