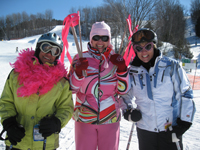 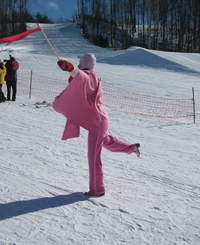 According to the media, the 2010 Vancouver Olympic Games started on Friday February 12.Â

For an elite and energetic group from the Canadian travel industry, it started with Open Jawâ€™s very own Winterboob on Thursday February 11 at Hockley Valley just north of Toronto. After all, we were togged out, psyched up, and in the mood for competition!

The seventh annual Winterboob didnâ€™t disappoint at all as mother nature served up a day of bright blue skies and brilliant sunshine (and enough snow to make the Olympic officials in B.C. a bit envious).

Breast of all, the fundraising broke last yearâ€™s record donation. Nina Slawek of Open Jaw has proudly reported over $45,000 was raised.

As always, the day comprised a little good-natured competition on the slopes along with indoor athletics (rubber boob tossing and bra-auctioneering, to name but a pair) and spa-ing for those of us who cut straight to the aprÃ¨s-ski.

Alioâ€™s Michele Rauzon from Montreal (a 5th time â€˜Boober) summed up the day: â€œI block WinterBoob as a priority. This to me is the best day â€“ the atmosphere is completely relaxing.Â  Itâ€™s a ton of networking combined with the energy and enthusiasm for a good cause.â€

Without exception, participants commented on the fun and fellowship â€“ yes, and networking â€“ but also the fact that breast cancer has touched so many of us.

Industry gents were not M.I.A. this year â€“ they not only showed up to support a â€œfemaleâ€ cause but who gamely (and in some cases, with unexpected enthusiasm) strutted around the room in fairly flamboyant foundation garments.

Merit Travelâ€™s Brenda Kyllo added, â€œIâ€™m so impressed at the number of men who support the cause of breast cancer! Loved WinterBoob – Iâ€™ll be back next year.â€

The only missing link? Ivanna Gabbalot herself, pressing the flesh (as it were) with her many fans.Â  Rumour had it that she had â€œaccidentallyâ€ twisted her ankle and had to be seen off the slopes by a studly team of ski patrollers.Â  Next year, Ivanna?