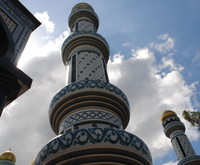 Some of the ASEAN tourism ministers laud “green” hoteliers

One of the sultanate’s biggest properties with 532 rooms, The Empire Hotel & Country Club

Borneo was the perfect place to host a green-themed conference, â€œASEAN, the Heart of Green: 10 destinations, One Conservation Vision.â€ To offset the carbon footprints generated by delegates travelling to this yearâ€™s ASEAN Tourism Forum (ATF) held in Brunei Darussalam, the host country, together with some 50 primary school students, embarked on a tree planting initiative that will see 1,500 new trees at the Berakas Forestry Reserve Recreational Park by World Forest Day on March 23. In addition, the tourism ministers from Brunei and the other nine destinations released four endangered turtles – three Olive Ridleys and one Hawksbill – back into the sea. The turtles were accidentally trapped in fishing nets and handed over to the governmentâ€™s turtle conservation program.

ATF is the largest travel trade show in the region focusing on the ASEAN countries (Association of Southeast Asian Nations comprising Brunei, Cambodia, Indonesia, Laos, Malaysia, Myanmar, Philippines, Singapore, Thailand and Vietnam). This is also the venue for the ASEAN tourism ministers to discuss and initiate new policies affecting travel into and within the region. In a bid to gain more awareness of the region from medium and long-haul markets, a new campaign was launched. â€œSoutheast Asia: Feel the Warmthâ€ (www.SoutheastAsia.org) reflects on the cultural diversity of the countries and warm hospitality of the people.

To generate awareness of the east ASEAN regionâ€™s green offerings, Brunei, Indonesia, Malaysia and the Philippines have introduced a marketing brand, â€œEquator Asiaâ€, leveraging â€œone of the most biologically productive and diverse regions in the world.â€ Working from the tagline â€œThe Heart of Biodiversityâ€, this project will focus on eco-tourism, advocating conservation. The countries involved will work with indigenous communities to enable them to play a more active role in conservation and improve their livelihood through eco-tourism practices.

En route to the conference centre each day, I was pleased to see many egrets making themselves at home along grassy areas all around the city, Bandar Seri Begawan. This is Borneo after all, where 55% of the land in Brunei is allocated to pristine rainforest.

Next yearâ€™s ATF will focus on â€œASEAN, a World of Wonders & Diversityâ€ and will be held in Phnom Penh, Cambodia from 15-21 January.