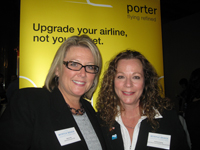 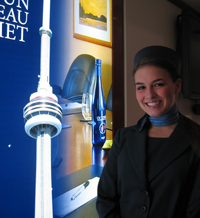 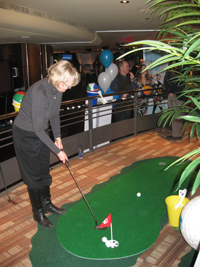 For clients whoâ€™d much rather wield a nine iron than a snow shovel, thereâ€™s good news. Porter Airlines, the plucky little carrier which is gathering a growing fan base, has announced it will be offering flights from Toronto City Centre Airport (which we all call The Island Airport) to Myrtle Beach, South Carolina.

The series, which will be on board Porterâ€™s 70-seater Bombardiers, will operate Thursdays and Sundays from Feb 28 to May 30, and take just under 2 Â½ hours, according to Porterâ€™s Sales Manager for Ontario Adam Wilcox.

We learned all this, plus how challenging it can be to sink a putt at 1,800 feet, at a launch event held recently at the CN Tower. Co-hosted by Porter and the hospitable folks from Myrtle Beach CVB, the evening featured delish southern-style nibblies and cocktails.

As golf writer Rick Young put it, â€œTake 100 golf courses in a 60 mile radius â€“ in itself amazing – add great Vegas-style nightlife and all kinds of restaurants: youâ€™re talking about a perfect golf destination.â€

According to Wilcox, Porter is hoping to create a product similar to its ski season shuttle from T.O. to Mont Tremblant â€“ and in effect replace what Myrtle Beach CVBâ€™s Scott Shult called the â€œ19 hour ritual in the mini-van from Toronto to South Carolina.â€

And for clients who arenâ€™t golfers?  Tons of family-oriented activities. Sunning on 60 miles of beaches. And (wait for it) shopping par excellence. Danna Lilly, also with the CVB, told me that the two Tanger Factory Outlets are the place to be for bargains with our now-powerful loonies.

After, of course, your golf drive has been perfected.