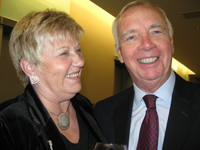 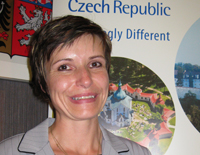 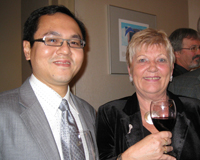 The Toronto skyline twinkled from the 15th floor of the downtown skyscraper, home to CzechTourism in Canada â€“ but not as brightly as the conversation. Some 50 friends and admirers of the Czech Republic had gathered as our hostess, Mirjana Sebek-Heroldova, director for the tourism authority for Canada, recalled the past decade with pride and not a little emotion.

â€œIf you had told me how quickly 10 years would fly by, I never would have believed it,â€ a beaming Mirjana said. She brought a smile to the crowd as she recalled visiting the local rep for Czech Airlines in 1999 to see about getting a good price for flights associated with her import-export business between Canada and the Czech Republic. Instead, he instantly offered her a job promoting the Republic and 12 hours later, there she was on a dizzying learning curve, dealing with travel agents, promotions, tour operators and marketing.

And it seems that Canadians are warming to this â€œStunningly Different Destinationâ€ with our visits growing from some 20,000 overnights 10 years ago to almost 90,000 in 2008.

Mirjana was careful to single out her colleague Jitka Klimova (â€œMy right hand, my hat, my big helperâ€), who was clearly also very proud to be there.

And with Christmas approaching, who better to talk about the festive season than Czechs, home to Good King Wenceslas?Â  (â€œActually, he was a duke,â€ Jitka told me, although singing Good Duke Wenceslas just wouldnâ€™t sound right.) Outdoor Christmas markets are a huge deal there, from late November through to January 1 and feature folk traditions, festive music, traditional edible goodies â€“ and not a Walmart in sight.

Not surprisingly, Mirjanaâ€™s wish to Santa is that he restore direct air service to Canada (the last flight was October 13) â€“ but she didnâ€™t want to dwell on that bit of sad news. As the appreciative guests enjoyed piping hot goulash and other Czech food, she graciously told us â€œItâ€™s not our night, itâ€™s your night!â€