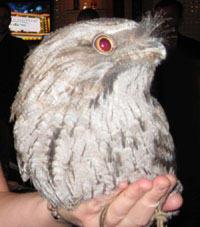 Taz the charming tawny frogmouth….is not an owl! 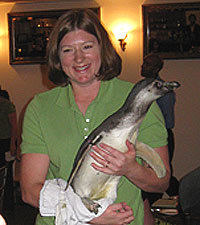 Wouldnâ€™t you just love to see the packing list?


The folks who get to escort the Busch Entertainment Corpâ€™s animals around North America sure donâ€™t travel like you and me. Nor do their animal charges.


â€œThese guys have more frequent flyer miles than I do!â€ laughs Chuck Cureau, one of Buschâ€™s animal trainers who flew into Toronto recently with a few of his feathered, furry and scaly friends. Taking these likeable creatures on the road is a big part of Buschâ€™s outreach program, whether itâ€™s educating school kids about endangered species, or making travel industry types like us fall instantly in love.


Lucky us to combine a lovely lunch at the Rosehill Resto with a little animal attraction. Can there be anything more awwwww-inspiring than wallaby Nurra, who even at her grown-up-girl weight of 18 lbs looks like a miniature kangaroo? OK, perhaps the matching penguins, Pete and Penny, whose endearing waddles had even the guys in the room showing their, um, softer side.


Now I could share with you all the official Busch stuff we were told, such as the extremely cool Sesame Street Safari of Fun, coming next spring. But Iâ€™ll bet you have more pressing questions, such as: Donâ€™t animals poop?


Answer: Yes they do. And at functions such as our luncheon, the handlers managed to gracefully eradicate any indiscretions discretely and swiftly. The Busch league are, apparently, just as careful with their hotel rooms, which, Chuck told me, they leave â€œcleaner than when we arriveâ€. The animals stay with their handlers in their hotel rooms, free to roam at will (cue the paper towel) but cloistered in the bathroom if a handler goes out for a quick bite.


â€œOh, that was a learning experience,â€ handler Robert Trejo recalled of a trip with a python. â€œWeâ€™d gone for a fast meal in the hotelâ€™s restaurant and when I got back the python had managed to turn on the bathroom sink tap and flood the bathroom.â€ (Hence the duct tape â€“ also now used to tape the toilet closed. Just in case.)


And though we enjoyed a fabulous meal, the animalsâ€™ tastes are a bit more primitive, Robert told me. â€œNurra eats grass and hay, but we went to a supermarket today to pick up some fresh fruit for her.â€ Penguins, natch, love their frozen fish.


Apparently going through airport security is a hoot, with security officers (you know, the ones hired for their personalities) crowding in with their cell phones to photograph the animal ambassadors. â€œAnd itâ€™s quite cute to see Pete and Penny waddle through the metal detector,â€ Robert admits.


Yes they do travel with the passengers, the smaller creatures tucked away, like all good hand luggage, under seats; while Pete and Penny each get their own seats (if the flight attendant asks â€œChicken or fish?â€ apparently itâ€™s no contest). Wallaby Nurra, because of her size, travels in the pressurized hold.


And who orchestrates it all? Carlson Wagonlit Travel â€“ who clearly appreciate a niche market when they see one.