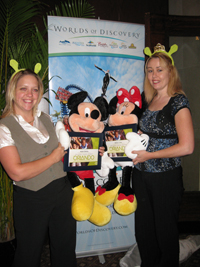 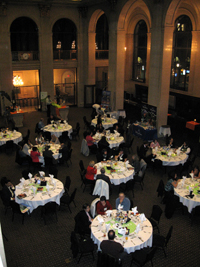 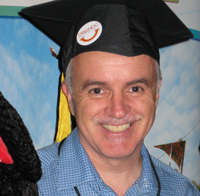 You usually associate graduations with sunny days in June â€“ not gloomy November evenings.Â  But the Orlando/Orange County folks wisely held theirs in Toronto this week, just as all us Canucks are gearing up for a busy winter season.

The venue was the snazzy Grand Banking Hall at One King West, a stunning heritage building in the heart of downtown, and the occasion was the official graduation of dozens of agents who have taken the first on-line Orlando Travel Academy.Â  And what would a graduation be without mortarboards (complete with tassels), photography, and a few adult beverages to celebrate?

The program has clearly been a success, with some 400 Canadian agents already making the grade. Plus, for just a couple of hours of their time, the grads get a raft of goodies such as discounts and freebies, and 2 CITC credits!

So since it was all about education, I asked the hosts (and some agents) to share some surprising factoids about Orlando.

Peter Cranis, VP Leisure Marketing with MCO, told me that youâ€™d officially need 67 eight-hour days to take in all the attractions (in fact, they cleverly held a contest with the winners doing just that â€“ check it out at Â www.67daysofsmiles.com). Dennis Quinn of Universal Orlando Resort told me that his fave new thing to do is ride the Hollywood Ripride Rocket.Â  No bland boring roller coaster this:Â  you get to pick your music and are filmed by eight video cameras.Â  Hang onto your lunch!

Barbara Lowe of Carlson Wagonlit in Midland said that though she already sells â€œa ton of Orlandoâ€ she learned a lot from the course and was amazed to find out about the high-end dining and the golf, golf and golf.Â  Will she sell more armed with this new knowledge? â€œAbsolutely!â€ And New Waveâ€™s Ray Surette, whoâ€™s been to Disneyworld 27 times, says even he picked up some pointers, particularly about other attractions in the area.

Way to go, MCO.Â  You sure earned a lot of smiles.