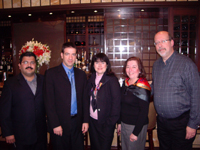 
The highly publicized display of the famous Dead Sea Scrolls at Torontoâ€™s Royal Ontario Museum is providing a welcome opportunity for Israelâ€™s Ministry of Tourism to boost interest in the state and its historical treasures. The tourism folks have been delighted to be able to report that for the months of September and October, the number of people travelling to Israel from Canada has never been greater.Â  So the Scrolls come all the way here to be put on a special display and a record numbers of Canadians decide to leave and visit the place they came from.Â  The logic seems a bit backwards to me, but maybe nobody understands the power of the Dead Sea and its Scrolls more than Oded Grofman, the Consul Director of Canada for Israelâ€™s Ministry of Tourism.Â Â

The Ministry played host to a gourmet breakfast for travel industry folks recently at the Park Hyatt Hotel in Toronto.Â  Their big announcement, now that the scrolls are finally wowing the crowds here, is that now, more than ever, the Dead Sea is being recognized as a destination that encompasses virtually everything a tourist could ask for. Besides the obvious historical and archeological sites, the region provides a rich cultural experience and its world famous spas are famous for their salts, mud treatments and personal pampering.Â  The region also features the Roman fortress at Masada, the Ein Gedi and Einot Tzukim nature reserves and Qumran, the home of the Essenes sect, where the Dead Sea Scrolls were actually discovered.Â

The Dead Sea is currently entered in the New 7 Wonders of Nature competition which is to be decided by an estimated 1 billion votes worldwide.Â  The folks representing Israelâ€™s attractions invite you to cast a vote in its favour at http://www.vote7.com/n7w/nature.Â