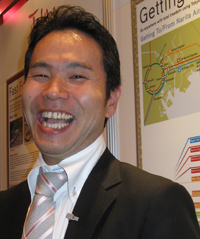 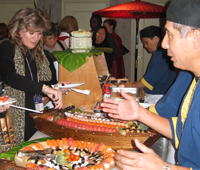 The generous buffet was enjoyed by all! 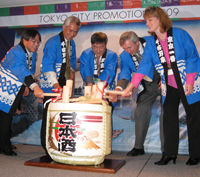 The ceremonial breaking open of the sake cask 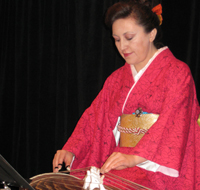 The mystique of Tokyo has been demystified â€“ at least for a group of some 150 travel agents who convened recently at Torontoâ€™s Park Hyatt Hotel.Â  Our hosts: a delegation of over 40 travel industry pros from Japan and Canada who were there to enlighten us on how to sell Tokyo.

Perhaps most surprising were the tidbits on how affordable the Japanese capital can be. According to the charming Noriko Naiato, Director of Tourism for the Tokyo CVB, accommodation at a typical ryokan, or inn, can be as reasonable as $69 Cdn per night (or for the truly dollar-stretched client with a yen to visit Tokyo, try a capsule hotel from just $46. A bit claustrophobic but cheap!)

And while the city has 173 restaurants which have earned coveted Michelin stars (Paris has only 75!) a mini-meal of a couple of pieces of sushi will set your client back just $1.20.Â  Can you find sushi at that price in Canada?

When it comes to culture, Japan is (thank heavens) a lot more than Hello Kitty. Sure thereâ€™s the pop culture of Japanese animated figures, but also classic ceremonies and events that draw Canadian visitors: Kabuki theatre â€“ apparently there are now headsets with English translation – tea ceremonies, ikebana (the delicate art of flower arranging) and spas, â€œsince ancient times, a part of the Japanese lifestyle.â€Â  And donâ€™t forget sake, the ever popular rice wine featured in hundreds of sake bars across the city.

According to Akira Tsushima, the General Manager of the JTB in Toronto, the average Canadian visitor stays between a week and 10 days, and a popular itinerary includes Tokyo, Hakone (near Mount Fuji) and Kyoto – plus a railpass (donâ€™t forget the Japanese drive on the left!).

As the evening wrapped up with a generous buffet celebrating Japanese cuisine, we all toasted to the bond between Tokyo and Toronto â€“ with sake, of course.

ã‚ã‚ŠãŒã¨ã†Â  (which is thank you, according to my friends at Google) to all our new Japanese friends!