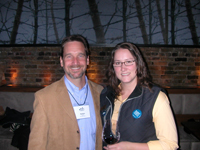 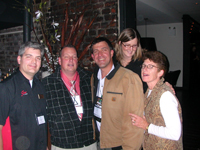 It wonâ€™t be long until weâ€™re all engaging in our traditionalÂ  fun little winter activities like shoveling the drive, scraping car windows and salting sidewalks.Â  Those ritual chores of winter are welcomed too because they signal another season of hitting the slopes has arrived.Â  But, since a large percentage of central and eastern Canadians donâ€™t live beside a mountain range, hitting the slopes for them means more or less taking part in a form of glorified tobogganing.Â  So if one enjoys skiing but unfortunately lives among small hills, how are they to satisfy their craving for a true mountain this winter?

The folks at Ski Vermont think they have the answer. They were in town last week to host a stylish cocktail party in the Kultura Restaurant on King Street East.Â  Representatives from all the major Vermont ski resorts were on hand to help me understand why the mountains of Vermont make a great destination not only for skiing but also for those with gourmet tastes.Â  Resorts such as Jay Peak, Stowe, Smugglersâ€™ Notch and Sugar Bush are proud to feature locally influenced dining experiences by expert chefs.Â

When people think of east coast skiing they often mistakenly think of icy runs and limited terrain.Â  However, recently Vermont resorts were ranked among the best in North America for their backcountry powder skiing. With over one hundred inches of annual snowfall in most resort areas, the Green Mountain Sate provides pretty good white coverage for several months each year.

Iâ€™m not much of a skier, but my view of Vermont skiing was given an extremely positive boost by the complimentary cocktails, plentifulÂ  Vermont inspired hors d’oeuvres, friendly resort representatives and the two masseuses that were commissioned to help relax the partyâ€™s guests. I donâ€™t think a winter visit to Vermont is too far off.Â Â Â Â Â