The cast of The Vintner’s Luck 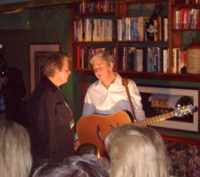 Being a Toronto native Iâ€™ve become accustomed to the early September hysteria that accompanies the Toronto International Film Festival.Â  Iâ€™ve also become accustomed to generally steering clear of this two-week event that causes grownups to act like 12 year old girls at a Jonas Brothers concert.Â  However, my avoidance of all things TIFF ended last week when Tourism New Zealand invited me to their cocktail party celebrating the premieres of the three Kiwi entries being screened during the film fest.

Held at Hemingwayâ€™s bar and restaurant in Yorkville, we were at the epicenter ofÂ the festival scene thatÂ can only be described as a US Weekly subscriberâ€™sÂ dream.Â  This obviously was not your typical travel industry event, but I have to hand it to New Zealand Tourism for taking this opportunity to catch any residual publicity in the wake of theÂ trio of KiwiÂ  films.Â  The productions in the TIFF lineupÂ areÂ The Vintnerâ€™s Luck, Under The Mountain and The Topp Twins.Â  Most of the cast from each of these films were on hand at the party and the night also included a live performance by New Zealandâ€™s legendary, and now motion picture documented, Topp Twins.

Radio hosts and TV personalities The Wine Ladies were on hand to talk wine with the stars.Â  I managed to talk to them for a while and snag a photo or two until I think they realized I wasnâ€™t a star and knew pretty much nothing about wine.Â Â

The party began winding down shortly after nine so I stepped out ontoÂ the buzzing streets of Yorkville.Â Â As I got to the corner of Cumberland and Bellair I became swept up in a mob of people swarming the intersectionÂ and clamouringÂ for a view of some celebrity entering Sassafrazz.Â  I figuredÂ since I was already caught in the mob, I might as well try to see whoever it was everyone was so excited about.Â  Then, while participating in the jostling and tippy-toe peering, I realized that, yes; I might as well be a 12 year old at a Jonas Brothers concert.Â Â