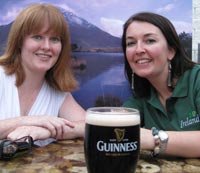 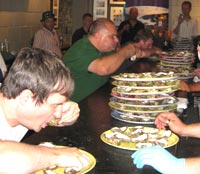 Oy! There were lots of oysters! 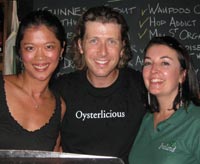 Beauty pageants feature pretty girls. And buff athletes competing are always a sight to behold. But itâ€™s a challenge to make an oyster-eating competition yummy to watch.


Between the slobbering competitors and the slimy, gray edibles, itâ€™s not easy on the eyes. And when the goal is to eat as many as you can in three minutes, itâ€™s really no picture. But last week the folks at Tourism Ireland and The Caili Cottage bar in T.O. managed to make an oyster-eating competition hilarious to watch and hugely fun (except, I suppose, for the oysters).


With heaping platters of mollusks standing by and many good-natured cheers (â€œDonâ€™t chew, just swallow!â€) from the crowd â€“ many of whom seemed relieved not to be participating â€“ it was clear that the six competitors were enjoying, as they say in the Emerald Isle, great craic.


The purpose of the evening was to promote Irelandâ€™s annual Oyster Festival held in the Georgian Village of Hillsborough (this year September 3 â€“ 7) and the countryâ€™s legendary oysters (â€œThe best in the world,â€ according to bar-owner Patrick â€œShucker Paddyâ€ McMurray, who says he eats at least six oysters every day.)


Turns out Ireland is home to many festivals including the Cork Jazz get-together (October), the huge Belfast Culture Festival (November) and this yearâ€™s Arthurâ€™s Day. To be celebrated in Ireland and around the world, it will mark the 250th anniversary of Arthur Guinnessâ€™ birth and will provide, no doubt, an excellent excuse to down much of the creamy ale.


â€œThe festivals are a great way to meet the locals,â€ says Judith Cassidy, Tourism Irelandâ€™s manager for Canada. And to explore the Emerald Isle when the tourists have all gone home!


Back in the bar, it was a moment of celebration for the fairer sex as the lone female competitor, Linda (who was too shy, or too full, to disclose her surname), walked off with first prize, having downed 148 oysters in three minutes. Sheâ€™ll be heading off to the Oyster Festival next month, courtesy of Tourism Ireland. Said the jubilant winner, â€œI love Guinness and I love whiskey â€“I was meant to go to Ireland!â€