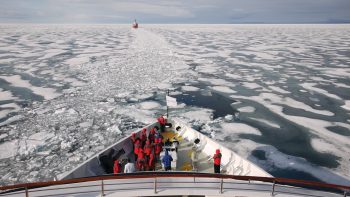 Silversea Cruises has named its line-up of experts for the inaugural voyage of Silver Endeavour, the former Crystal Endeavor that was purchased by Silversea this summer, and has been undergoing updates to serve as the luxury line's fifth expedition cruise ship.

For the inaugural voyage of Silver Endeavour, Silversea's guests will fly directly to Antarctica via Silversea's "Antarctica Bridge,"  its business-class fly-cruise offering, and embark the ship on King George Island on 21NOV, 2022. Guests may experience the towering ice formations of Antarctic Sound, hike the landscape, take Zodiac tours and kayak. The Antarctic Peninsula is also home to vast penguin colonies and other wildlife species, including whales, various other bird species, and seals. Following in the footsteps of famous explorers, Silversea plans to call in the South Shetland Islands, before returning to King George Island where guests will board a flight back to Punta Arenas.

The expedition team will include: Captain Niklas Peterstam, who has served aboard Silver Endeavour since September 2021; Conrad Combrink, Silversea's SVP of Expedition, Destination and Itinerary Management, who is responsible for creating and coordinating many aspects of the cruise line's expedition program; Marieke Egan, Expedition Leader, a naturalist with a passion for exploring wild habitats around the world, and Nicholas Crane, former President of the Royal Geographical Society, an author, geographer and cartographic expert.