They say it's a dog's life, and this is one lucky dog.

At a 26OCT ceremony in New York on the maiden arrival of Holland America Line's new flagship Rotterdam, Joska the Service Dog was awarded recognition usually reserved for the cruise line's most travelled human guests.

Joska reached a milestone achievement of 700 cruise days on Rotterdam’s current 150th Anniversary Transatlantic Crossing, making her eligible to receive the Platinum Medallion, the highest past-guest award for cruising days. Joska, a 10-year-old black Labrador retriever, is the ultimate globetrotter and spends most of her days cruising on Holland America Line with her owners, Cornelia “Connie” and Cornelis Marinussen. (They had already previously received their own Platinum Medallions.) 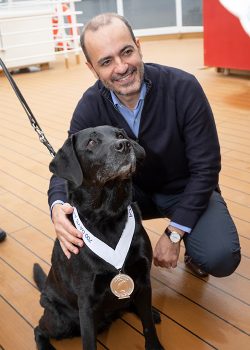 “Joska is the first service animal to achieve this lofty status and we wanted to honor her with an event that shows her how special she is to everyone in our company,” said Antorcha.

“Registered service animals are always welcome aboard Holland America Line ships, and Joska has become a member of our family. She not only brightens the spirits of everyone on board, but she also allows Connie to do what she loves most, which is to cruise and explore the world.”

The Dutch couple have been cruising with Holland America Line since 2013 and have taken nearly 60 cruises. From Alaska, Hawaii and Canada to Europe, the Caribbean, and the Mediterranean, Joska has sailed on more than 50 Holland America Line voyages since joining the Marinussen family in 2014 to assist Cornelia, who is legally blind, and is among the most traveled dogs in the world.