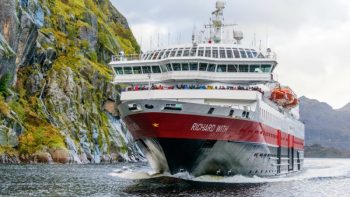 Hurtigruten Norwegian Coastal Express has its first environmentally upgraded battery-hybrid powered ship, MS Richard With. It is the first of seven in the Coastal Express fleet to be upgraded, and now features state-of-the-art technology designed to significantly reduce both CO2 and nitrogen oxides (NOx) emissions.

Hurtigruten Norwegian Coastal Express is a sister company to Hurtigruten Expeditions. The Hurtigruten Group has declared its intentions to "raise and set new (environmental) standards for the entire travel industry."

"With MS Richard With back in operations as a fully-upgraded ship, guests can sail the Norwegian coast on a quieter, state-of-the-art, and environmentally-friendly ship, while enjoying a traditional experience unlike anything in the world. Over the next year, all our seven Coastal Express ships will be upgraded to be more sustainable," said Hedda Felin, CEO of Hurtigruten Norway.

According to the company, the 100 million Euro green upgrade program is one of the largest environmental upgrades of its kind in Europe and the largest in Hurtigruten's history.

After an ongoing green upgrade of the Hurtigruten Norwegian Coastal Express fleet, the Group will have six hybrid vessels. Hurtigruten Group stopped using heavy fuel oil more than a decade ago and was the first expedition cruise company to ban non-essential single-use plastic throughout its entire operation.