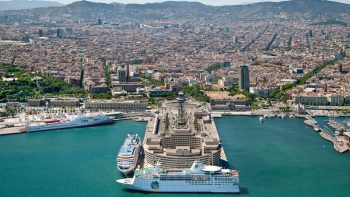 An original poster-child for overtourism, Barcelona has put cruise ships in its sights for new measures to stem the overwhelming tide of tourists as travel rebounds – not all in a good way.

Barcelona was Europe’s busiest cruise terminal pre-pandemic, and it looks set to beat its own records as travel rapidly recovers. In MAY this year alone, 125 cruise ships docked in Spain’s second-largest city.

That’s too much, say local leaders and residents, who say cruise ships bring pollution and congestion, with day-tripping pax not contributing enough to the local economy.

As Open Jaw reported earlier this month, the Spanish city on the Mediterranean has proposed introducing new taxes for visitors to the city, including cruise pax. Travellers to BCN already have to pay 3 euros to stay for longer than 12 hours in Barcelona, and 1 euro to stay for a shorter period of time. They also need to pay 1.75 euros to just visit the city. More recently Barcelona officials proposed three more taxes specifically targeting cruise pax, although no specifics are available yet.

Now, Bloomberg reports the capital of the Catalonia region is also looking to cap cruise ships in its harbour and tax arriving ships.

“We cannot go back to the 3.1 million cruise passengers,” Barcelona’s Deputy Mayor was quoted saying in the report. “With the pandemic, the perception of public space has changed and we cannot return to previous scenarios. The impact is too great for residents.”

The report does note some tension as businesses in central parts of the city say they do prosper from cruise guests – even ones who do not stay overnight.

And in 2018, the city already moved cruise ships to a terminal farther away from Barcelona’s downtown waterfront.

Nevertheless, the city’s mayor is looking at new taxes on cruise ships themselves (not just guests) to increase revenues from port calls – and on capping ship numbers.

There’s already a precedent set by other cruise destinations. Venice banned large ships to a port outside the city and from its lagoon, and limits have been set by other EU cruise destinations like Dubrovnik, Santorini, Dublin, Bruges, and even another Spanish destination, Palma de Mallorca, which permits a maximum of three ships, only one of which can carry 5000 or more guests, in port at any time.

The fight against overtourism in BCN isn’t limited to the cruise industry.

As Bloomberg notes, “In a bid to reduce the displacement of communities and local businesses from its core, the city has already banned new hotels in its center and taken steps to reduce the number of Airbnb listings with a licensing system and heavy fines for rule-breaking.”

It’s another indication that as the travel industry recovers worldwide, many destinations want to see changes to how we consume travel.