The head of Norwegian Cruise Line Holdings (NCLH) held an unprecedented online event just one day after the CDC made it official that its Conditional Sail Order would be allowed to expire on 15JAN and become a voluntary set of guidelines for cruise lines to apply to prevent the spread of COVID-19 on ships sailing in U.S. waters.

Frank Del Rio, President and CEO of NCLH, brought in the big guns - science - to give invited media and trade the facts of the safety of cruising, the science behind projections of when the pandemic will stop playing havoc with the cruise industry, and confidence to travel advisors at their wits’ end after two long, hard years.

The timing was vital. During Wave Season - cruising’s ‘Christmas’ - as travel advisors should be reaping huge bookings, but are instead dealing with another round of cancellations due to the spread of Omicron.

The cruise company invited the Chairman of its SailSAFE Global Health and Wellness Council and former Commissioner of the U.S. Food and Drug Administration, Dr. Scott Gottlieb, to answer the questions on every travel advisor’s mind, presented to him by Andrea DeMarco, the new Chief Sales & Marketing Officer of one of the NCHL brands, Regent Seven Seas Cruises.

The Double Standard “Has Hurt our Industry” 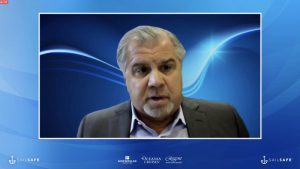 Del Rio came out fighting during his opening and closing remarks, pulling no punches in blaming media and even politicians for the unfair bad rap cruising has gotten during COVID.

“There are different rules for cruising,” he declared of CDC regulations of the industry. “That hurts our industry.”

He said because the cruise industry has been responsible with testing and measuring risks and reporting that data, “media and politicians turn to the data we’ve provided and sensationalize it.”

And he pointed out, “It’s the only industry they can pick on because we report so honestly.”

Del Rio compared the COVID experience to the “war of our generation,” urging trade partners, “We’ve survived two years… now is not the time to quit.”

“We’re almost there,” he assured the online audience.

In answer to several key questions by DeMarco, Dr. Gottlieb was firm that the science says that Omicron is peaking “right now”, and that, within a couple of weeks, “that’s going to be evident to consumers so that’s good news,” he said.

By the end of the month, he added, “We will see confidence return to make future plans.”

Vaccinations and prior infections are creating a “wall of immunity” Gottlieb explained.

Combine that with “gamechanger” therapeutic drugs to treat new cases that Gottlieb said will be in “ample supply” to consumers by the fall, he said, “This is the year we’ll start to transition” from a pandemic, to an “endemic phase where it’s persistent but in the background of our lives.”

Once we get past the Omicron wave, he argued, “Consumer confidence will change quickly, “ with consumers feeling more secure and less at risk this summer.

By spring, he predicted we’ll see such low levels of COVID that consumers “won’t be worrying about it. They’ll be looking to regain and reclaim things important to them, like vacations.”

“As we go into the fall, we will not want to give up those freedoms - the psychology going into the fall will be different,” he said, adding COVID will feel more like other viruses we are already accustomed to dealing with.

Del Rio took an early stance strongly in favour of strict protocols and then, vaccines, as key tools and even a competitive advantage in the return to cruising for not only NCLH brands, but for the recovery of the industry.

“I felt at start and now - that this is a leisure activity that lends itself to implementing measures that control risk,” he told the online audience, pointing out that cruise ships can control their environments including testing, vaccinated crew and pax, as well as the upcoming availability of therapeutic drugs.

“This can be a safer vacation than in hotel or foreign city where you can’t manage risk,” he said.

But being able to control risk - and measure and report data, compared to other activities where it’s not being measured, “captures attention of the media,” which has been an unexpected “downside.”

But he believes that “thoughtful consumers who understand the risk” involved in most vacations, between airports, planes, restaurants and other congregate settings, will appreciate the risks being measured as cruises do, in order to mitigate those risks.

Where the Rubber Hits the Road - or the Water

At the end of the discussion, Del Rio asked the question on everyone’s minds: “What our travel advisor partners are selling now is summer in Europe and summer in Alaska,  into fall,” he told Gottlieb, “Can they sell those with confidence?”

“The most likely scenario is low prevalence this summer,” Gottlieb replied, adding that Alaska as part of the U.S. and also the EU, were on the same trajectory of recovery as the rest of the U.S.

“People are going to want to get back to things they enjoy.”

Dr. Gottlieb is even putting his money where his mouth is.

“Are you really going to cruise this summer?” DeMarco asked him.

“I am!  I’m looking forward to bringing my kids as well,” Gottlieb replied. “I’m very confident…  I've been very cautious -  I have young kids - and I'm very confident we’re going to be travelling this summer.”