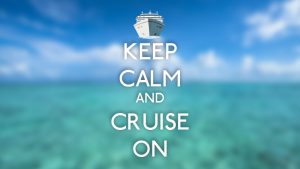 I heard someone snort yesterday when the term “Wave Season” was used.

Amid the exponential growth of Omicron cases in North America and in many destinations, between cases on board, cases in destinations, and ports of call turning cruise ships away, not to mention the CDC reinstating its advice last week to Americans not to cruise, we’ve seen cruise lines scrambling to cancel or alter sailings in recent days.

Royal Caribbean and Norwegian Cruise lines have cancelled sailings in light of the effects of Omicron. Norwegian has also delayed the return to sailing of some of its ships.

Even one of the most celebrated moments of cruising’s calendar, World Cruises setting sail in the New Year, is being affected.

A report in Cruise Radio reveals that Regent’s 120-day World Cruise is now no longer a world cruise. Instead, the day before it was to set sail, guests were advised that it’s been divided into four segments, all of which depart from Miami and remain in the Caribbean and Latin America.

Guests in all these cases of cancellations and big itinerary changes are being offered the flexible and generous options that have developed over the course of the pandemic.

But no matter what extraordinary measures cruise lines do in the face of another wave of COVID, despite the industry’s much more rigorous application of health protocols than land-based gatherings or even U.S. domestic flights, they can’t win in the eyes of public opinion.

Even some U.S. politicians, as Open Jaw reported earlier this week, are calling for cruising to be shut down again.

The situation is making some in the industry concerned that we’re heading back to the darkest days of 2020.

Norwegian Cruise Line Holdings’ CEO, Frank Del Rio, has been very assertive about the “competitive advantage” of fully-vaccinated cruising and other protocols. Cruise Week asked him why the company was cancelling so many cruises given its commitment to the strictest of protocols.

“Our experts are telling us that the peak surge is happening now through the next two weeks or so,” he added, indicating he thinks this is a short-term problem, not morphing into an industry-wide shut down 2.0.

“Cancellations of specific sailings on ships that have already returned to service are expected to be very short-term — 10-15 days. We have delayed the return to service on a few ships currently laid up for up to 6-8 weeks.”

That ‘just a blip’ outlook – that the problem is real but likely to be short-lived – may be shared by other industry leaders.

Even after the attention-getting CDC announcement not to cruise, Cruise Week reports that Senior VP & Chief Communications Officer Roger Frizzell revealed that Carnival Corp. “has no planned changes, due to the effectiveness of enhanced health and safety protocols.”

The CDC itself doesn’t appear to be ratcheting up the tension following its advice last week for Americans to avoid cruising.

The CDC’s infamous Conditional Sail Order has been due to transition on 15JAN from a mandatory into a purely voluntary set of COVID-19 health and safety guidelines for cruise ships operating in U.S. waters.

Rather than having any intentions of reverting back to a “No Sail Order” like MAR 2020 or even the very restrictive CSO of fall of 2020, the CDC confirmed to an editor at Cruise Critic this week that the transition will go ahead as scheduled.

The message, then, from the cruise industry and even the CDC, is that this is just another storm to be weathered by the industry, with clear sailing ahead in the near future.