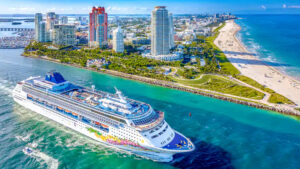 Not only are travellers finally cruising again - they’re proving themselves to be big spenders, too. At least when it comes to ‘splashing out’ while on board.

Cruise Industry News reports that cruise lines are seeing record onboard revenues on a per passenger basis.

Industry executives are attributing the welcome boost in revenues on pent up demand, bundling sales strategies, and consumers just dying to spend.

The trend is being seen across the board at all the major cruise corporations.

On Carnival Corporation’s Q3 earnings call, CEO Arnold Donald said, “Our onboard revenues for guests are off the charts, and our Net Promoter Scores have been exceptionally strong.”

Royal Caribbean Group’s CFO, Jason Liberty, who takes over for Fain in JAN, added that onboard spending exceeded the same quarter pre-pandemic. “Onboard revenue strength contributed to a 12 percent increase in total revenue per passenger cruise day, compared to the third quarter of 2019.”

“Onboard revenue has exceeded our base on expectations by over 20% with broad-based strength across all shifts, regions, and revenue streams,” he said.

Royal Caribbean International’s CEO Michael Bayley credited some of the unprecedented increase to a new, pre-cruise revenue marketing software system, and added, “We've also really increased the volume of special groups such as gaming groups that are coming on our ships and that's proving to be very profitable.”

NCLH’s Del Rio credited bundled packages. “We're doing more and more bundling across the three brands, and that gives people a very fresh wallet because the combination of them booking further out means they have even more time to refill that wallet and make it even fresher, if you will. And so, all these factors are contributing to the higher onboard spend.”

While Del Rio cautioned that the spike in onboard spending may not last as early enthusiasm for the return to cruising and ‘splashing out’ on a cruise vacation settles down, cash-strapped cruise lines that are still working through the ‘re-birthing’ pains of getting their fleets sailing again have something to smile about.