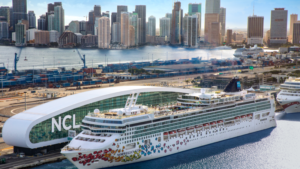 Of all the cruise restart stories, this is one that might be the most closely-watched.

On 15AUG, Norwegian Cruise Line returned to cruising from Florida, with the Norwegian Gem’s embarkation on a week-long cruise to the Western Caribbean.

The Norwegian Gem is the third of line’s ships to resume operations. Norwegian Jade resumed cruising from Athens on 25JUL, and the Norwegian Encore restarted Alaskan cruises from Seattle on 07AUG.

The Gem’s sailing Sunday marked two milestones: it bookended a 17-month suspension of cruising from Florida, as well as the inauguration of the line’s recently-completed NCL Terminal at PortMiami.

The new terminal has transformed Miami’s waterfront skyline. The approximately 188,000-square-foot building draws inspiration from a nautilus, with its spiraled and multi-level façade, opening to grand ocean and city views. Its artistically designed exterior is complemented by a carefully curated collection of art throughout the complex as part of Miami Dade County Art in Public Places public art program. It was built to LEED Gold standards for optimizing energy, water efficiency, air quality and utilization of local materials and resources. 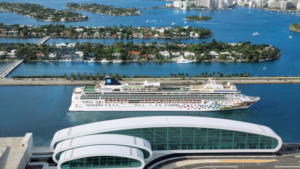 But perhaps the most news-worthy aspect of the Gem’s embarkation on the weekend was its defiance of Florida state law banning vaccination mandates.

In fact, in its statement following its resumption of cruising, the company made a point of stating:

“The Company is the only cruise line in Miami and the state of Florida to offer cruises where 100% of the guests and crew are fully vaccinated.”

The cruise line’s parent company, Norwegian Cruise Line Holdings, and its outspoken Chairman/CEO Frank Del Rio, have locked horns with the governor of Florida, Ron DeSantis,’ in a fight over the CDC’s health regulations of the cruise industry.

The return to sailing came exactly one week after a federal judge in Miami granted Norweigan Cruise Line Holdings the right to require full vaccination on board the company’s cruises.

US District Judge Kathleen Williams noted in her decision that “the Defendant (Florida) fails to provide a valid evidentiary, factual, or legal predicate.”

“Amid myriad, rapidly-changing requirements regarding quarantining and testing, there is one constant that facilitates cruise line customers’ access to advertised ports of call: documentary proof of vaccination will expedite passengers’ entry into virtually every single country and port where Plaintiffs intend to sail.”

In a statement following the judge’s decision last Sunday, the parent company of Norwegian Cruise Line, Regent and Oceania said, “This order will now allow the Company to operate in the safest way possible with 100% vaccination of all guests and crew when sailing from Florida ports. Nothing takes priority over the health and safety of the Company’s guests, crew and the communities visited and its commitment to them is paramount.”

Florida has appealed that ruling, but it did not stop Norwegian from restarting cruising from Florida Sunday with a fully-vaccinated ship.

When pressed about whether – legal battles with Florida aside – the company’s insistence on 100 per cent vaccination “loses you some business with the family market,” Del Rio replied, “I believe 100% vaccination is a competitive advantage.”

People know that the three brands of Norwegian Cruise Line Holdings–Oceania, Regent, and NCL–stand for something: If you’re willing to travel under these conditions, you want to travel as safe as possible.”

I think we’ve become the cruise line of choice for that.”

As Open Jaw has reported, Florida is also embroiled with the CDC over the health agency’s regulation of cruising. There have been wins on both sides, and the latest court decision could come in SEP.