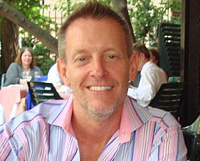 How long have you been in the business?  (Laughs) Too long! Since 1995. I started as a travel agent for Flight Centre, working in Australia.

What’s the best part of the job?  Representing a product that you absolutely believe in.


What was your first job?  Working at Kmart.  I actually got to announce over the P.A. “Attention Kmart shoppers”!

Ever had a brush with fame?  Two dinners with Sir Richard Branson.  He’s remarkably understated and comes across as quite shy.

What’s the scariest thing you’ve ever done?  Paragliding in Rio.  I have a major fear of heights.

Any guilty pleasures? How does copious amounts of rosé wine in the summer sound?


What’s your favourite airline? Etihad – I just flew them and the service was impeccable.

What do you always travel with? (Big sigh.)  My iPhone.  I actually travel very light, always just with a backpack.

When are you happiest? When I’m travelling.

What will be the biggest challenge for the industry in the next 12 months?  The global economy.  Yet again.

Whom do you most respect in the industry? I would have to say Richard Branson. He’s just a genius who markets himself and the brand.


If you could change one thing about the industry what would it be?  How it’s all so connected. There was a time when charter was charter and sked was sked, but now everyone’s trying to be everything to everyone and mega-corporations are buying small companies and making them less interesting.

They say that keeping staff is one of the biggest challenges in our business.  What does Intrepid do to retain staff? We have some clearly designed core values and we really do stick to them, such as encouraging personal growth, being passionate about what we do, and having fun.

What’s your favourite destination?  Without a doubt, Brazil. If I could figure out a way to get my life there I would, even if it means braiding hair on Ipanema beach.

How much do you travel each year?  About eight weeks – so far this year I’ve travelled to Australia, Vancouver a few times, Egypt, India, and Dubai. I only get jet lag going to Vancouver!

Is there anything you won’t eat?  Yeah, weird hearts and eyes and stuff like that.

Where’s your next trip?  Iran. We have a very cool two week trip there.

What do you hope to be doing in 10 years?  (Laughs) If I’m not braiding hair? I’ll be swinging in a hammock in Buzios, a beautiful resort town in Brazil.