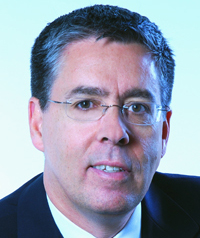 How long have you been in the business? Almost 30 years – 10 years with RBC. Before that I headed up Alamo and I’ve also worked for another travel insurance company.

What’s the best part of the job? I get a kick out of building business. Travel people are cool.

What did you want to be as a kid? Fireman. Still do.

Ever had a brush with fame? I skied with Harrison Ford and Mel Gibson for a weekend in Whistler. You know what? They’re regular guys. And short!

What’s the scariest thing you’ve ever done? When I was in my 20s mountain climbing on Cascade Mountain I had to be helicoptered out. Scary and embarrassing.

What do people not know about you? That I’m a bit of a loner.

What’s on your iPod? I have a set of electronic drums, so Led Zeppelin, Van Morrison, The Beatles – anything I can drum to.

What will be the biggest challenge for the industry in the next 12 months? Allowing everyone in the food chain to make a reasonable margin.

Whom do you most respect in the industry? I’ve had a lot of mentors and friends like John McKenna and Vanessa Lee. I also respect anyone who’s trying to diversify in this market.

If you could change one thing about the industry what would it be? People have to take the time to meet face to face instead of this damn email.

If you could sit next to anyone on a long haul flight who would it be? Robin Williams or Bill Clinton.

What drives you crazy? Grandstanding.  And traffic.

What are you really bad at? Golf.

Is there anything you won’t eat? Brussel sprouts. And Japanese sea urchin.

What do you hope to be doing in 10 years? Semi-retired, perhaps part time in Toronto and part time in the Okanagan.