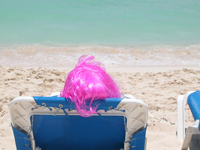 How long have you been in the business? Which business? And I’m not sure that’s any of yours.

Do you remember your first boss? No. But I’ll bet he/she remembers me.

How did you wangle your current job? Honey, Ivanna does not wangle. If you are inquiring as to how I ended up joining forces with the OpenJaw’jinks, they seemed so wretched, the whole thing was just crying out for my brand of uniqueness. Plus, it was the perfect opportunity to stay in touch with all my Pumpkins.

Does your office have a dress code? The office is dressed in some fairly basic desks and such, along with tony pink accents.

Who inspires you? Mostly, the Queen Mother. Now there was a dame with a sense of irony and a taste for cheap whiskey. Her daughter’s been a bit of a disappointment though.

What do you really think of the Dinkettes? You know, they have some things in the right place. Their feet, for instance, are right at the end of their legs. It isn’t their fault they are so large, is it?

Do you have a favourite charity? You mean, besides myself? Well, I’m very actively involved in saving the Harakah Karaoke Gnat. It’s called that because it emits a piercing yelp when mating. (Who doesn’t?) In any case, it is in danger of extinction which, I understand, has grave implications for the planet. It’s a wonderful cause.

If you could sit next to anyone on a long haul flight, who would it be? (real or imaginary, alive or dead) Since this is a family channel, it pretty much rules out most choices. If I have to keep it clean … hmm … since it’s a long flight, it would have to be someone fairly entertaining. Someone with innocuous body odour. And someone who doesn’t talk too much. How about God? I’d like to have a word or two with her. Failing that, I pick Dame Edna.

They say miniskirts are coming back for good.  Care to comment? Dahrling, did they ever leave? A miniskirt can pretty much decide its own fate. We are not here to interfere with a force of nature.

What’s your favourite travel accessory? You mean, like, one? I suppose it would have to be lipstick. No matter where you are. No matter the predicament you find yourself in. There is nothing the right shade of pomegranate cannot fix.

What sign of the zodiac are you and how does that affect your personality? I’m a Libran, dahrling. And I am totally unaffected by all that nonsense about indecisiveness. I think. Well, occasionally. Not enough so anyone would notice. Except when I can’t decide on something.

When were you most afraid? You do get right at the heart of things, don’t you? Looking for my soft underbelly, are we? A chink in the armour? A vulnerability? Well, I was a little fearful when I heard that disco was over back in 1983. And then there was the time I noticed my first sagging. I know what you’re thinking. But it gets worse — my plastic surgeon was away. It’s a moment I’ll never forget. It is etched in my brain the way a tattoo burns the tender flesh of one’s buttocks. Oh gawd! Excuse me for a moment.

Richard Branson:  marketing genius or attention-starved class clown? Oh, puhlease. I’ve met bigger geniuses at the Addison Show. First of all, he’s short. Which is really unforgivable for a billionaire head of an empire. Secondly, he has bad skin. Thankfully, he’s somewhat photogenic, because up close he is no picnic. And thirdly, the man is so inept in the boarding lane, he may as well have stayed a virgin.

What do you like to do on vacation? My goodness, you do leave no pillow unturned. I most enjoy going out and mixing it up with the locals. I mean, otherwise, I may as well drink at home, right? I also spend a great deal of energy in exercising my faith — making pilgrimages to all the sacred shopping landmarks: Channel in Paris, Valentino in Milan, Jimmy Choo in New York.

Red or white? Does it matter?

How do you stay in shape? I let others do it for me.

What is the part of a woman’s body that’s the first to go? Her hymen.

How would you describe your fashion style? True style defies description, dahrling. But if forced to pigeon hole myself, I would say I’m an outstanding mix of sexy cougar chic with feathery overtones. You can never overdo animal print.

What do you miss most about “the good old days” of travel? I could go on – and I have. There were the hotel suites, the first class seats, premium liquor, a much younger boys club, lavish parties, trips, etc.  But it all comes down to one thing: the budgets. They were something.