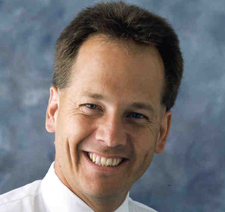 How long have you been with Maritime? Since 2001 – before that I was running Thomas Cook for Canada.

What did you want to be as a kid? (Laughs) A dentist. Then I realized how much schooling is needed so I became a CA instead.

If you could have any job in the industry, what would it be? I’ve always wanted to try tour operations. There’s this mystique about risk that intrigues me.

Ever had a brush with fame? I’ve played golf with Wayne Gretzky. Did we give him mulligans? Absolutely.

Describe your dream vacation. This might sound weird, but I’d love to do a bike trip on the same itinerary as the Tour de France.


What do people not know about you? That in university I broke my neck in a car accident.

Any hobbies or interests? Lots of sports – hockey, golf, biking. I bike to work 30 kms each way.

What will be the biggest challenge for the industry in the next 12 months?  Getting through this market meltdown.

Whom do you most respect in the industry? Lena de Cesare at Transat. She’s tough but she stands by her word.


If you could sit next to anyone on a long haul flight who would it be? As long as he promised to talk, Warren Buffet.

What drives you crazy? People who are late. It shows a lack of respect