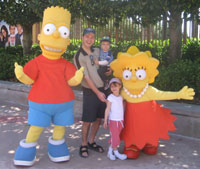 How are you enjoying the new job? It’s a change after being at Advantage for 14 years, but after three weeks I’m settling in. It’s an interesting combination of franchised agencies (the Vasco brand) and consortium (the Gama side).

What did you want to be as a kid? I grew up in the business – the first job I had was stamping at my parents’ agency in Aurora. So I wanted to be a travel agent.

If you could have any job in the industry, what would it be? I think I’ve finally found it!

If you could sit next to anyone on a long haul flight, who would it be? The science fiction writer Robert Heinlein. A fascinating man.

What’s your biggest extravagance? Decorating my house for the holidays – Christmas, Halloween, you name it.

What skill or talent do you wish you had? I play the trombone but wish I were a better musician.

What do people not know about you? That I was once arrested for illegal distribution of alcohol at a keg party at university!

What drives you crazy? Bad manners.

What is going to be the industry’s biggest challenge this coming year? I think we’re going to see more reductions in commission levels.

Where do you hope to be in 10 years? Where I am now, but having built the group to where I want it to be, as competitive as any other group in the province.